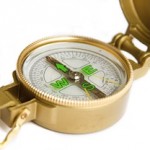 The JISC funded ESCAPES (Enhancing Student Centred Administration for Placement ExperienceS) project at the University of Nottingham has focussed on improving the management of its placement process for both staff and students. As employers are more likely to take on graduates with work experience, students may be more likely to choose a course that has a placement element.

The relationships between teaching staff, administrative staff, students and businesses are an essential part of effective placement management. Challenges from the institution’s viewpoint included:

As well as some technological improvements, the project has resulted in a number of benefits for both staff and students, including:

For placement processes to be handled effectively, it is recommended that:

If you would like to find out more about this project, the following resources may help:

The University of Huddersfield and Teesside University have been working together to produce an online CRM (Customer Relationship Management) Good Practice Handbook. The Handbook aims to guide HE (Higher Education) and FE (Further Education) institutions through the development of strategic BCE (Business and Community Engagement) CRM processes, as well as provide advice and guidance on data management and change management. It contains a number of case studies and examples from the tertiary education sector.

The aim of the project was to deliver an online Handbook in CRM Good Practice, however there were some challenges along the way:

The Handbook is now complete and will be launched at the AURIL (Association for University Research and Industry Links) Conference in October 2012. Other benefits resulting from this project are:

Current Government policy is to bring the HE sector and industry closer together and the building of such external relationships can have an impact on helping institutions pursue distinctiveness in the sector. Some of the recommendations from the Handbook include:

If you would like to find out more about this project, the following resources may help: 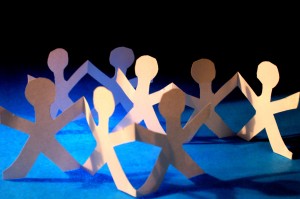 If so, come and join our RM in HE/FE Community of Practice discussion list, which is open to anyone who wants like to share their experiences of improving their relationship management in the tertiary education sector. We’d love you to ask questions, comment, suggest resources etc, or just follow the conversation.

We’ll be sharing our findings from the current JISC Relationship Management Programme, which is looking at three different areas:

We have a range of resources available at both the JISC CETIS RMSAS (Relationship Management Support, Analysis and Synthesis) project website and at the Just Enough RM (Relationship Management (a dynamic resource to try and help anyone starting out on the RM path). We also have documents on using Service Design in HE and FE and an overview to RM in HE and FE to get you started.

So what are you waiting for? Come and join the RM in HE and FE Community – we’d love to see you there!

Relationship management is becoming increasingly important in the tertiary education sector as education institutions try to meet the challenges of funding cuts and increased student and community expectations. Customer relationships, if handled effectively, will bring benefits to both the organisation and the sector as a whole and it is in this area that JISC developed the Relationship Management Programme.

Whilst the two strands can be viewed as focusing on two different types of institutional stakeholder – external business contacts in the case of the BCE CRM strand and students in the SLRM strand – many of the issues regarding the way in which the relationship is managed by the institution are similar. For example:

The current funding situation means that institutions need to become more cost-effective. Therefore, making the most of the systems already in place, improving processes, and ensuring that the student or BCE customer has a valuable experience may help achieve this goal.

This latest round of projects, which will run until July 2012, is split into three different strands:
* Strand 1: Good practice in CRM (Customer Relationship Management) – projects yet to be confirmed. A project to deliver a comprehensive online handbook of good practice in CRM processes for HE (Higher Education) and FE (Further Education).
* Strand 2: Student progression, retention and non-completion (8 projects). Demonstrator projects delivering service innovations that improve the quality of the student experience, specifically to enhance progression and retention to minimise non-completion.
* Strand 3: Alumni engagement (7 projects). Demonstrator projects developing and validating innovative processes and harnessing web technologies to support mutally beneficial alumni engagement.

The projects in Strands 2 and 3 follow on from the SLRM projects in the last Programme, but focus on different stages of the student lifecycle.

If the last projects from the last Programme are anything to go by, the level of expertise in relationship management in the institutions involved will increase considerably, so we wish all the projects in this latest Programme every success.

The final meeting for the JISC Relationship Management Programme was held in the beautiful surroundings of York St John University a couple of weeks ago. Simon Whittemore, JISC Programme Manager, has written an excellent summary of the event – The Pleasures and Pains of Managing Relationships and Changing the Habits of Information Hamsters – and as it’s such a good overview, I’ll try not to repeat anything here.

From a personal point of view, it was lovely to finally meet all the project teams and in some respects it’s a shame that it’s all coming to an end, as I’ve really enjoyed chatting to everyone and following project progress over the past 10 months or so. Because there were 20 projects in the Programme, it was decided to put them into groups, so they could each create a collaborative presentation for the final meeting. I know all the project teams have worked really hard and I must confess to feeling a bit like the producer of play on its opening night, who just wants all the efforts of that hard work to shine through.

The three key issues I see for CRM are:
* Buy-in from senior management is essential to ensure that the CRM approach is successful.
* Cultural change is inevitable but is challenging to manage.
* Data (around contacts and the customer relationship) must be shared, yet this is often a stumbling block. For example, some people are very happy to view other’s data, but not share their own (information hamsters?).

For SLRM, the issues are slightly different:
* The student must be put at the centre of the process.
* What the student wants is not necessarily what the institution thinks the student wants.
* Service design techniques can help to identify failpoints in the student experience and areas for improvement.

There is some work to do now on synthesising the findings across the Programme, but it’s been such a pleasure to work with everyone, that I will miss following their progress. So good luck – I wish you all every success with continuing your CRM or SLRM approaches in your institution.

I attended JISC CETIS’ Introduction to Modelling workshop in Birmingham last week to try and gain an understanding of issues and what one needs to consider, when attempting it for the first time.

So why bother with modelling? What value does it bring? Models are a way of communicating and sharing experiences. They are very visual and may have some narrative, but with some slight clarification of terminology used, they should be understandable by most stakeholders. This is key. Otherwise, how else can the whole system be shown to stakeholders who may only know a small part?

Whilst the workshop looked at both hard and soft models, it was the softer side that caught my attention. Hard models, such as UML (Unified Modelling Language) or BPM (Business Process Modelling) are ideal for defining technical specifications and describing business intelligence. Soft models, as one would expect, tend to be quite woolly and may include portfolios of evidence (documents, observational notes, video diaries, etc), scenarios and personas, and use SSM (Soft Sytems Methodologies).

There were two practical exercises that we all attempted. One of which was to produce a soft systems diagram showing how to respond to a JISC call for funding. I’d never done any modelling before, but something that had seemed so simple in the introduction, was unbelivably difficult when we sat down to try it for ourselves! We didn’t need any whizz bang technology – just a handful of coloured markers, multi-coloured post-its and a large sheet of paper. Here’s a model that one of the groups came up with. 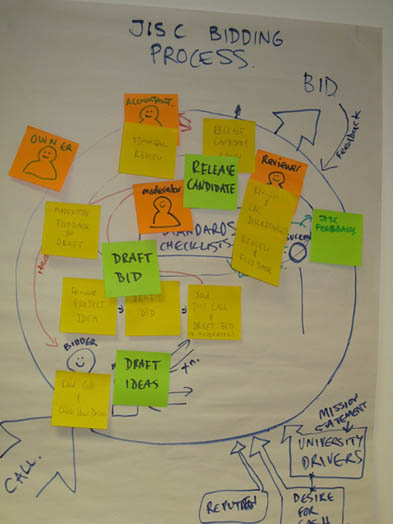 Attempt at a Soft Systems Model

Using diagrams like this can help tell a story by setting the scene (scenario) and describing the personas (not usually a real person but a ficticious description of a particular role that person might do) and the ways they interact. The main focus of a soft systems model is on the people or actors in the system.

People often have difficulties knowing how far they should go when modelling and when they should stop. However, the presenters were all unanimous in answering this question: the actual purpose for doing the modelling should set the boundaries for how far/deep one goes with it. But, as a newbie, the real key for me was that one should model just enough to achieve one’s aims (otherwise one could end up modelling for years!).

If you’d like to find out a little more about the event, there are notes and presentations from the workshop now available online. You might also be interested in the JISC Innovation Base (a repository of models for the Higher Education domain, which includes both formal and informal models) and the Agile Modeling Website (Agile Modeling is a practice-based methodology for effective modeling and documentation of software-based systems).

You might be interested in Kathy Harris’ blog, which has a couple of posts on Relationship Management. Her most recent post – CRM and KM – Are We There Yet? – talks about the importance of KM (Knowledge Management).

In trying to improve the relationship we have with all of our institutional stakeholders, from pre-enrolment to business partnerships, information plays a key role – and we need to know how to manage that information. Harris states that:

organizations still need a strategy, focus and structure in knowledge management. KM is a business practice, a process and a cultural change. It even includes policies — for reuse, for knowledge sharing, and so on. It is not the tools of search, social computing, expertise location, content management, etc. It is about people using those tools and processes to find and apply information to fill a need or resolve a specific problem in the (often unique) context required by a customer, a call center agent or a sales and marketing team member.

As Harris concludes, KM is not just about making information available, but it’s also about organising and enhancing that information to provide a deeper, richer knowledge that can benefit both the institution and the stakeholder.