“Preparing for a Thaw – Seven Questions to Make Sense of the Future” is the title of a workshop at ALT-C 2011. The idea of the workshop was to use a simple conversational technique to capture perspectives on where Learning Technology might be going, hopes and fears and views on where education and educational technology should be going. The abstract for the workshop (ALT-C CrowdVine site) gives a little more information and background and there is also a handout available that extends this. The workshop had two purposes: to introduce participants to the technique with a view to possible use in their organisations; to gather some interesting information on the issues and forces shaping the future of learning technology. All materials have Creative Commons licences.

The short version of the Seven Questions used in the session (it is usual to use variants of one form or another) are:

Fourteen people, predominantly from Higher Education, attended the workshop; their responses to the “Seven Questions” are all online at http://is.gd/7QResponses and there is an online form to collect further responses at http://is.gd/7Questions that is now open to all. This blog post is a first reaction to the responses made during the workshop, where a peer-interviewing approach was used. A more considered analysis will be conducted on September 14th, taking account of any further responses gathered by then. 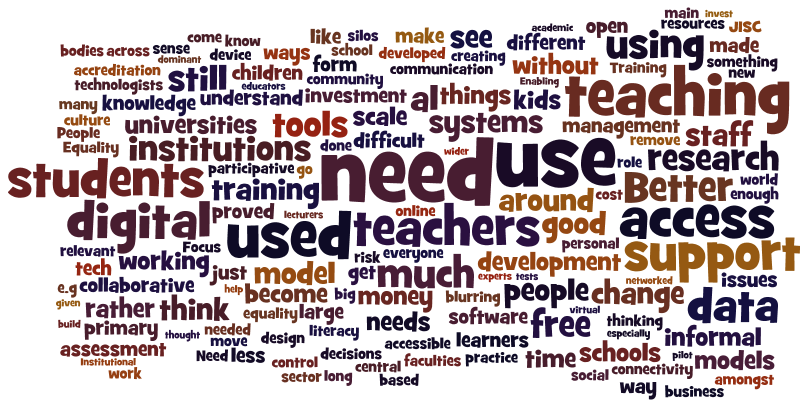 Wordle of all responses to the “Seven Questions” that were made during the ALT-C 2011 workshop. Click image to open full-size.
(NB: four words have been eliminated – “learning”, “education”, “technology”, “technologies”)

My quick take on the responses is that there are about half a dozen themes that recur and a few surprising ideas. These appear to be:

The workshop participants seemed to enjoy the approach and I was pleased at how well the peer interviewing worked, although I can see that this might not be right for all groups. I’ll also be watching out for differences in response that might be present between peer interview and solo completion of the online form. 1 hour for introduction, reciprocal interviews and closing discussion was rather restrictive but it seems to have surfaced some good materials and it certainly gave a good indication of what could be achieved with a little more time.

A more considered and detailed write-up will be published soon; I’ll add a comment.