A little bit of text mining on a fairly large number of blogs with an educational technology (or technology enhanced learning…) makes a neat set of snapshots on “open …”.

Considering the words following “open” from January 2009 to the end of October 2012 shows the following distribution (where words with a relative frequency of <2% are ignored, as are low-value words like “and”). Hence it shows a share of the dominant themes. 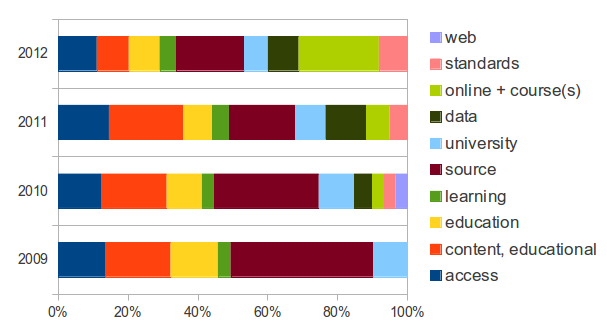 The share for “online+course” is largely attributable to MOOCs and similar, although some of it is likely to be the use of “open online” referring to something else. This probably confirms the guesswork of followers of Ed Tech fashion but it may be a bit more of a surprise to see that open educational/content has taken such a tumble. I wonder whether some of the “open education” share has been diverted into “open online/course”. I’m also pleased to see “open standards” gaining more of a foothold but a left with a feeling that “open data” got a bit over-hyped in 2011.

About the data: 28116 blog posts were harvested and these contained 13723 uses of “open”. The blog post harvesting was done by the Mediabase and the analysis was done by the author, both as part of the EC funded TELMap project.

3 thoughts on “Snapshots on the Changing Landscape of “Open …””