One of the keys to a fuller understanding the logic of competence is the interplay between, on the one hand, the individual definition of an ability or competence concept, and on the other hand, a framework or structure containing several related definitions. Implementing a logically sound representation of competence concepts depends on this fuller understanding, and this was one of the requirements presented in the previous post.

A framework by its very nature “includes” (in some sense to be better understood later) several concept definitions. Equally, when one analyses any competence concept, it is necessarily in terms of other concepts at least related to competence. There would seem to be little difference in principle between these more and less extensive structures.

When we consider a small structure it is easier to see that the small structures usually double as a concepts in their own right. To illustrate this, let’s consider UK National Occupational Standards (NOSs) again. Back in post number 3 we met some LANTRA standards, where an example of a unit, within the general topic of “Production Horticulture”, is the one with the name “Set out and establish crops”. In this unit, there is a general description — which is a description or definition of the competence concept, not a definition of its components — and then lists of “what you must be able to do” and “what you must know and understand”. The ability items are probably not the kinds of things you would want to claim separately (there are too many of them), but nevertheless they could easily be used as in checklists both for learning, and for assessment. My guess is that a claim of competence would be much more likely to reference the unit title in this case.

From this it does appear that a NOS unit simultaneously defines a competence concept definition, and also gives structure to that concept.

It is when you consider the use of these competence-related structures that this point reveals its real significance. Perhaps the most important use of these structures by individuals is in their learning, education and training, and in the assessment of what they have learned. In learning a skill or competence, or learning what is required to fulfill an occupational role, the learner has many reasons to have some kind of checklist with which to monitor and measure progress. What exactly appears on that checklist, and how granular it is, makes a lot of difference to a learner. There can easily be too much or too little. Too few items on the list would mean that each item covers a lot of ground, and it may not be clear how they should assess their own ability in that area. To take the LANTRA example above, it is not clear to a learner what “Set out and establish crops” involves, and learners may have different ideas. The evidence a learner brings up may not satisfy an employer. At the other extreme, I really wouldn’t want a system to expect me to produce separate evidence for whether I can start a tractor engine, find the gears, and steer the machine. That would be onerous and practically useless.

Structures for practical use in ICT tools need, therefore, to be clear about the what is included as a separate competence-related definition within the structure, and what is not included, or included only as part of the description of a wider definition.

The “Set out and establish crops” LANTRA unit does have a clear structure, and the smallest parts of that structure are the individual ability and knowledge items — what someone is expected to be “able to do”, and to “know and understand”. And let us suppose that we formalise that unit in that way, so that an ICT learning or assessment support tool allowed learners to check off or provide evidence for the separate items — e.g. that they could “ensure the growing medium is in a suitable condition for planting” and that they knew and understood the “methods of preparing growing media for planting relevant to the enterprise”.

Then, suppose we wanted to include this unit in another structure or framework. Would we want, perhaps, just one “box” to be ticked only for the unit title, “Set out and establish crops”; or would we want two boxes corresponding to the elements of the unit, “Set out crops in growing medium” and “Establish crops in growing medium”; or would we rather have all the ability and knowledge items as separate boxes? None of these options are inherently implausible.

To put this in a different way: when we want to include one competence-related structure within another one, how do we say whether we just want it as a single item, or whether we are including all the structure that comes with it? The very fact that this is a meaningful question relies on the dual nature of a definition, as either a “stand-alone” concept, or structure.

I illustrated a change of wording in the eighth post, raising, but not answering the question of whether the concept remained unchanged across the changed wording of the definition.

Let’s look at this from another angle. If you author a framework or structure, in doing that you are at the same time authoring at least one competence-related concept definition, and there may be one main concept for that structure or framework. You will often be authoring other subsidiary definitions, which are parts of your structure. You may also include, in your structure or framework, definitions authored by others, or at another time. Indeed, it is possible that all the other components come from elsewhere, in which case you will be authoring only the minimal one concept definition.

Contrast this with the subsidiary concept definitions given in the structure. Their titles and descriptions clearly must be different. They may be defined at the same time as the structure, or they may have been defined previously, and be being reused by the structure.

Exactly how all this is represented is a matter for the “binding” technology adopted. Representing in terms of an XML schema will look quite different from RDF triples, or XHTML with RDFa. I’ll deal with those matters in a later post. But, however implemented, I do think we have the beginnings of a list of information model features that are necessary (or at least highly desirable) for representing this interplay between competence definitions and structures. (I will here assume that identifiers are URIs.)

I’ve tried to represent this in a small diagram. See what you think…
(note that the colours bear no relation to colours in my other concept maps) 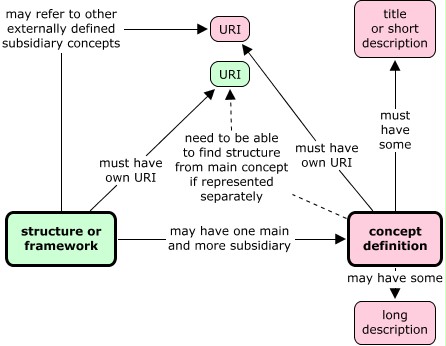 Of course, as well as the URIs, titles and descriptions, there is much more from structures or frameworks to represent, particularly about the relations between the concepts. So it is to the practical implementation of this that I turn next.

4 thoughts on “Representing the interplay between competence definitions and structures”