Lorna and I recently contributed a study on possible reforms to JACS, a study which is part of a larger piece of work on Redesigning the HE data landscape. JACS, the Joint Academic Coding System, is mainatained by HESA (the Higher Education Statistics Agency) and UCAS (Universities and Colleges Admissions Service) as a means of classifying UK University courses by subject; it is also used by a number of other organisations for classification of other resources, for example teaching and learning resources. The study to which we were contributing our thoughts had already identified a problem with different people using JACS in different ways, which prompted the first part of this post. We were keen to promote technical changes to the way that JACS is managed that would make it easier for other people to use (and incidentally might help solve some of the problems in further developing JACS for use by HESA and UCAS), which are outline in the second part.

There’s nothing new here, I’m posting these thoughts here just so that they don’t get completely lost.

Subjects and disciplines in JACS

One of the issue identified with the use of JACS is that “although ostensibly believing themselves to be using a single system of classification, stakeholders are actually applying JACS for a variety of different purposes” including Universities who “often try to align JACS codes to their cost centres rather than adopting a strictly subject-based approach”. The cost centres in question are academic schools or departments, which are discipline based. This is problematic to the use of JACS to monitor which subjects are being learnt since the same subject may be taught in several departments. A good example of this is statistics, which is taught across many fields from Mathematics through to social sciences, but there are many other examples: languages taught in mediaeval studies and business translation courses, elements of computing taught in electronic engineering and computer science and so on. One approach would be to ignore the discipline dimension, to say the subject is the same regardless of the different disciplinary slants taken, that is to say statistics taught to mathematicians is the same as statistics taught to physicists is the same as statistics taught to social sciences. This may be true at a very superficial level, but obviously the relevance of theoretical versus practical elements will vary between those disciplines, as will the nature of the data to be analysed (typically a physicist will design an experiment to control each variable independently so as not to deal with multivariate data, this is not often possible in social sciences and so multivariate analysis is far more important). When it comes to teaching and learning resources something aimed at one discipline is likely to contain examples or use an approach not suited to others.

Perhaps more important is that academics identify with a discipline as being more than a collection of subjects being taught. It encapsulates a way of thinking, a framework for deciding on which problems are worth studying and a way of approaching these problems. A discipline is a community, and an academic who has grown up in a community will likely have acquired that community’s view of the subjects important to it. This should be taken into account when designing a coding scheme that is to be used by academics since any perception that the topic they teach is being placed under someone else’s discipline will be resisted as misrepresenting what is actually being taught, indeed as a threat to the integrity of the discipline.

More objectively, the case for different disciplinary slants on a problem space being important is demonstrated by the importance of multidisciplinary approaches to solving many problems. Both the reductionist approach of physics and the holistic approach of humanities and social sciences have their strengths, and it would be a shame if the distinction were lost.

The ideal coding scheme would be able to represent both the subject learnt and the discipline context in which it was learnt.

Tim Berners-Lee suggested a 5 star deployment scheme for open data on the world wide web:
* make your stuff available on the Web (whatever format) under an open licence
** make it available as structured data (e.g., Excel instead of image scan of a table)
*** use non-proprietary formats (e.g., CSV instead of Excel)
**** use URIs to denote things, so that people can point at your stuff
**** link your data to other data to provide context

Currently JACS fails to meet the open licence requirement for 1-star data explicitly, but that seems to be a simple omission of a licensing statement that shows the intention that JACS should be freely available for others to use. It is important that this is fixed, but aside from this, JACS operates at about 3-star level. Assigning URIs to JACS subjects and providing useful information when someone accesses these URIs will allow JACS to be part of the web of linked open data. The benefits of linking data over the web include:

The main overhead is in setting up, maintaining and managing the data provided by the web service, but Southampton University have already set one up for their own use. (The only problem with the Southampton service–and I believe Oxford have done something similar–is a lack of authority, i.e. it isn’t clear to other users whether the data from this service is authoritative, up to date, used under a correct license, sustainable.)

SKOS (Simple Knowledge Organization System) is a semantic web application of RDF which provides a model for expressing the basic structure and content of concept schemes such as thesauri, classification schemes, subject heading lists, taxonomies, folksonomies, and other similar types of controlled vocabulary. It allows for the description of a concept and the expression of the relationship betweens pairs of concepts. But first the concept must be identified as such, with a URI. For example:
jacs:H713 rdf:type skos:concept
In this example jacs: is shorthand for the JACS base URI, http://id.jacs.ac.uk/ as suggested above; rdf: and skos: are shorthand for the base URIs for RDF and SKOS. This triple says “The thing identified by http://id.jacs.ac.uk/H713 is a resource of type (as defined by RDF) concept (as defined by SKOS)”.

Other assertions can be made about the resource, e.g. the preferred label to be used for it and a scope note for it.
jacs:H713 skos:prefLabel “Production Processes”
jacs:H713 skos:scopeNote “The study of the principles of engineering as they apply to efficient application of production-line technology.” 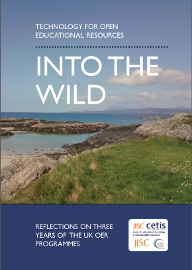 Into the Wild (Book cover)

With great pleasure and more relief I can now announce the availability of Into the wild – technology for open educational resources, a book of our reflections on the technology involved in three years of the UK OER Programmes.

Between 2009 and 2012 the Higher Education Funding Council funded a series of programmes to encourage higher education institutions in the UK to release existing educational content as Open Educational Resources. The HEFCE-funded UK OER Programme was run and managed by the JISC and the Higher Education Academy. The JISC CETIS “OER Technology Support Project” provided support for technical innovation across this programme. This book synthesises and reflects on the approaches taken and lessons learnt across the Programme and by the Support Project.

This book is not intended as a beginners guide or a technical manual, instead it is an expert synthesis of the key technical issues arising from a national publicly-funded programme. It is intended for people working with technology to support the creation, management, dissemination and tracking of open educational resources, and particularly those who design digital infrastructure and services at institutional and national level.

You may remember Lorna writing back in August that Amber Thomas, Martin Hawksey, Lorna and I had written 90% of this book together in a Book Sprint. Well, the last 10% and the publication turned in to a bit of a marathon-relay, something about which I might write some time, but now the book is available in a variety of formats:

All varieties are free or at minimum cost for the distribution channel used; the content is cc-by licensed and editable versions are available if you wish to remix and fix what we’ve done.

Available via the Cetis publications site.