At the “Emerging Reality: Making sense new models of learning organisation” workshop at the CETIS conference 2012, Bill Olivier from Institute of Educational Cybernetics at the University of Bolton presented a scenario of “ Open Higher Education” which was developed by a group of participants from the UK HE sector. Having been involved in the UK OER programme, looking at the trends and development around OERs and open education in HE, it was really interesting to see this scenario emerging as one of the outcomes of the meeting of a UK HE cluster through the modified Future Search Method adopted by the TEL-Map project.

During a meeting at Nottingham, prior to the CETIS conference, the TEL-Map UK HE cluster identified some 80 trends and drivers impacting on the future of TEL in UK higher education. The group rated them for Impact/Importance and consolidated the high impact, high uncertainty trends and drivers into two overarching but mutually independent axes: ‘Variety of universities’ and ‘Student demands’. This cross-impact analysis resulted in these two axes placed to develop four context scenarios, namely Oxbridge Model, Traditional University Model, De-Campus Model and Open-Ed Model. 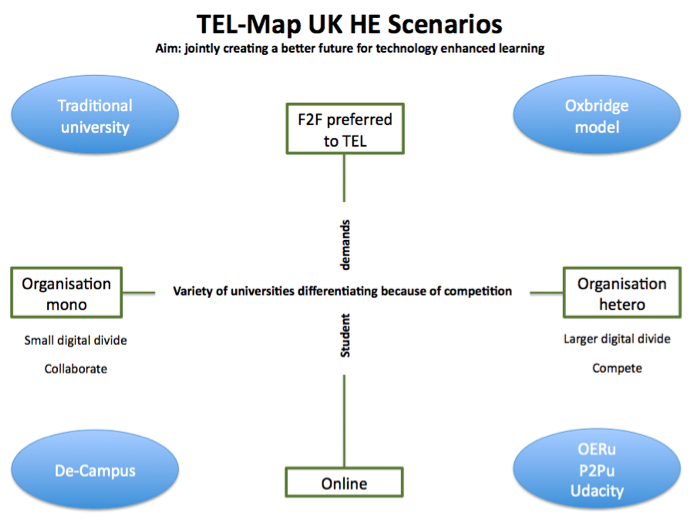 The Open Higher Education scenario was identified from the bottom right quadrant of the scenario diagram above. In this scenario, emerging leaders include the OERu, P2Pu and Udacity. The common features of this scenario’s learning model include low cost content and peer learning support, with expert support when it is needed. Initially, students choose this form of HE because they don’t have to pay for the services provided by universities that they cannot benefit from, such as sports halls, students societies, classrooms and libraries, etc. This model expands as more and more people find online university courses affordable & practical and more students see its benefits, including those who would have attended traditional university.

Along with the Open Higher Education scenario, three other thought-provoking and interesting scenarios were presented and discussed, including, Christian Voigt’s “Technology Supported Learning Design”; Adam Cooper’s “The Network of Society of Scholars” and David Sowden’s (University of Hull) presentation on “New Models of Learning”. During the workshop, the participants were also given an opportunity to vote for drivers identified in each scenario using ideascale to stimulate the discussions and debates. If you are interested to know more about the workshop, a full report will be available soon at the TEL-Map project website.