You might have noticed that Cetis has a new web site www.cetis.org.uk. For the last six months I’ve been working with my colleagues, Mark Power, David Sherlock, Phil Parker, Sheila MacNeill and Martin Hawksey to update our web presence to reflect the new organisation. I thought I’d share some of the thinking behind the new site.

Cetis has been funded by Jisc for over a decade. When we became a service in 2005 we incorporated Jisc into our title and brand, marrying our blue with the Jisc orange.

Now that Jisc is not longer our main funder we decided to go back to a colour scheme based around our original dark blue. Mark Power worked on the brand design of the new site with input from Paul Dennis at Consul.

I think its safe to say that the logo created a lot of internal discussion! Mark designed the new logo using the original mosaic Cetis logo as a starting point.

The globe of the new logo acknowledges both the international aspects of our work and partners but also the importance of creating and adopting global standards for technology.

The new site is a Word Press site with a theme Mark developed. Using Word Press means we can maintain the site more easily than we could in the Jisc Cetis site, particularly when it comes to software updates.

The next phase of Cetis activity will inevitably involve working with a variety of funders on a range of projects, so our audience is changing. We had a good think about the old Jisc Cetis site and decided it would be a mistake to think we could represent everything we do on the new site. We’ve tried to simplify the interface to give a simple overview of who we are, what we do and what we offer. Educational technology and standards are of course still at the core of Cetis work. The new design also contains more visual elements most notably the new slides on the front page. 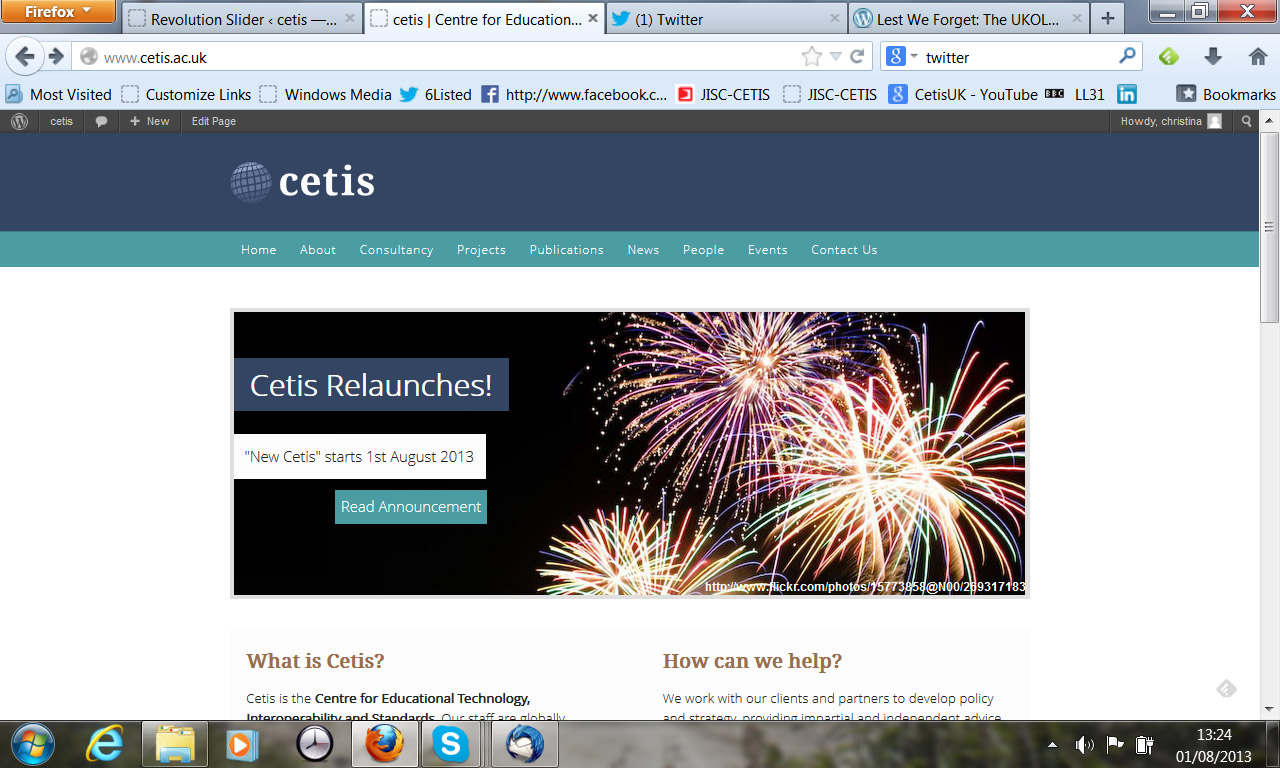 We have a news feed cetis-news for updates on new projects, publications, events. This will complement the more personalised commentary provided by the staff blogs.

Our blog posts used to be at the heart of the Jisc Cetis site. Followers of the blogs need not worry, we will still be blogging over on blogs.cetis.org.uk, but we realise that not everyone we work with will be avid readers of our blog posts.

Our publications are still available at publications.cetis.org.uk, but like the other two sites has had a make over. Like the blog site we will maintain the publications site as a separate entity.

Our presence on other social media sites will be changing too to reflect the new branding. Unfortunately @cetis was taken on Twitter – so we’ve plumped for @cetisuk. The new logo has been added to out Linkedin site and our YouTube site.

The old site is not now being updated and we have begun the process of archiving the old site and the wiki which will eventually become static html.

I hope these notes explain some of our thinking behind the new site. Please do let us know what you think of the new site and brand.

Finally I’d like to say a big THANK YOU to Mark, David, Phil, Sheila and Martin for all their hard work on the new site.