We’re steadily working closer to the next release. Its been a long time coming, but I think is worth it. We’ve actually removed a lot of features for this release, as we get a better idea of what works and what’s useful, and focus on improving the usability core features – we’ll put features back in if anyone requests them, but I think a “less is more” approach is better at this point.

We’ve moved to a new version of Eclipse (Ganymede) which is a lot faster and supports more platform specific features which caused some headaches in M1 (drag and drop in particular had some quirks). We’ve also been improving the UI in various ways, as you can see in this screenshot: 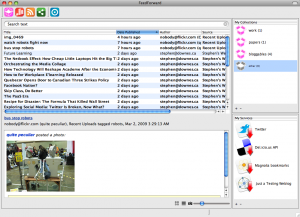 We’ve got a bit more testing to do before the release, but feel free to check out the code from Subversion if you’re keen!