An intial look at UKOER without the collections strand (C). This is a post in the UKOER 2 technical synthesis series.

The below graphs are also the ones which compare most directly with the work of UKOER 1 which didn’t have an strand focused on aggregation. 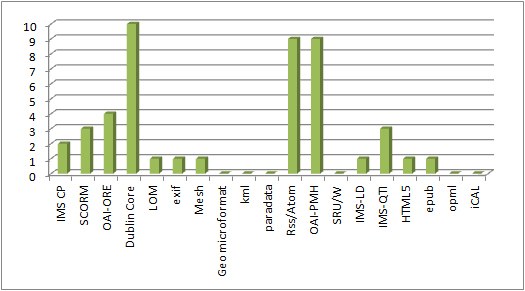 I’m hesitant to over-analyse these graphs and think there’s a definite need to consider the programme as a whole but will admit, that a few things about these graphs give me pause for thought.

now in a sense, the above graphs fit exactly with the observation at the end of UKOER that projects used whatever tools they had readily available. However, compared to the earlier programme it feels like there are fewer outliers – the innovative and alternative technical approaches the projects used and which either struggled or shone.

Speculating on this it might be because institutions are seeking to engage with OER release as part of their core business and so are using tools they already have, it might be that most of the technically innovative bids ended up opting to go for strand C, or I could be underselling how much technical innovation is happening around core institutional technology (for example ALTO’s layering of a web cms on top of a repository).

To be honest I can’t tell if I think this trend to stable technical choices is good or not. Embedded is good but my worry is that there’s a certain inertia around institutional systems which are very focused on collecting content (or worse just collecting metadata) and which may lose sight of why we’re all so interested in in openly licensed resources (See Amber Thomas’ OER Turn and comments for a much fuller discussion of why fund content release and related issues; for reference I think open content is good in itself but is only part of what the UKOER programmes have been about).