What is PROD?
PROD is a “directory and monitoring tool for JISC funded projects. It lets you search for and quickly gather information about any of the projects in the system” and as part of our support of various JISC programmes, CETIS staff update it based on information in their reports and conversations with projects.

All Lifelong Learning and Workforce Development projects are featured there. Rather than reel off a list of technologies and standards which can be unsurprisingly quite dull, I looked at some of the visualisation tools which colleagues have been using. These help people have a quick overview and see any weighting of particular technologies etc.

Wordle
A wordle showing a quick snapshot overview of the main technologies in use across the programme: 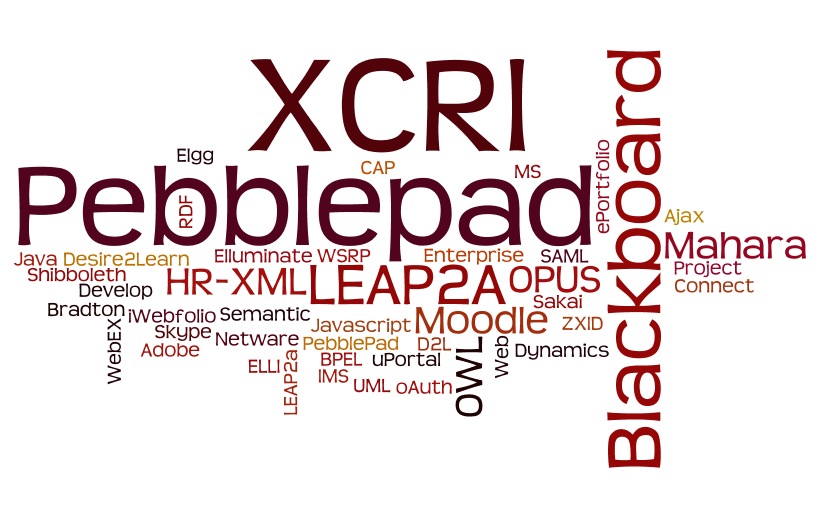 Wordle showing the technologies in the LLLWFD programme

Mindmap
A mindmap showing all the standards and technologies used by each project, further expansion includes all the comments detailed in PROD (please click on link to access the actual mindmap, below is just an image of the mindmap) 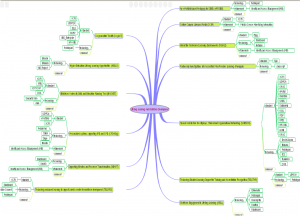 Bubblegram
A bubblegram provides and overview of different tools, where the circles are larger then it highlights that particular technology is used b more than one project.

What this means…
No major surprises in the use of technologies or standards but a really interesting spread. It also echoes the technologies and standards in use across other programmes that have been reported.
Overall, it could be said that the programme is not hugely ‘technical’ in application but instead focusses on processes, staff, and employer issues, which are often the key to success rather than the specific technology of choice. Many interesting issues have arisen and challenges which will persist well beyond the programme, such as accreditation of prior learning, competencies, identity and access management. These all have their own particular nuances when viewed from the various perspectives or employer, institution and learner. There is a great deal of synthesis and reflection coming out of the ‘Developing themes’ on the SSBR blog and it will be interesting to see the final reports to gain a deeper insight across the whole programme.

Project visits by the SSBR team supporting the JISC Institutional Innovation Programme have flagged up a need for some ‘beyond the how-to’ type of guides. Whilst the guidance about how to use a certain technology are obviously helpful, there is a need for some additional guidance about the wider issues in using particular technologies, for example, looking at embedding the technologies into an institution, good practice pointers, looking at a technology from various perspectives and so on.

There are myriad technologies being used in the Institutional Innovation Programme, but for starters the ones that were suggested in the recent project visits were Wimba Create, Luminosity and PebblePad. Many projects are investigating these products (and of course out with this programme) so a little asking around for resources and sharing the results can benefit many.

Wise colleagues have pointed to useful information which is “not about one of these particular tools but might have some ‘transferable’ general suggestions that could be applied to using Wimba – the JISC guide to Elluminate is pretty thorough and definitely more than a basic ‘how to’.”

Also flagged up was the WebPA project, that have just released some guides to using their system that are the kind of thing that have given this project such longevity way beyond its funding period.

With specific reference to PebblePad, their website includes 30 case studies and a number of student ‘stories’ from their recent conference. Although many project teams may have already read the JISC Effective practice with e-Portfolios guide, published in 2008, there is some very useful information in there and it could be worth a revisit – hindsight based on knowledge gained in a project can often give it a different slant. The guide covers e-Portfolios from various perspectives, and has a number of links to other work/studies at the end of the guide. The guide includes the quote:
‘The picture has often been a complex one, with confusion over what an e-portfolio is. More recently, consensus is gathering, and clarity is being brought to the discussions, as our experience with using e-portfolio tools grows.’ (JISC (2007) e-Portfolios: An overview of JISC activities)

It could be argued that 3 years on this is still the case, but our experience is still growing and it is projects such as those in the Lifelong Learning & Workforce Development programme that are informing this consensus and taking the work forward. Any guidance produced by projects is a valuable output for the Programme and the wider community. Keep them coming!

I’ve just left the JISC Curriculum Design and Delivery Programme meeting, a 2 day event held in sunny Manchester. Several people may post about the overall meeting, but I thought I’d post some of my thoughts about some of the issues I found interesting amongst the wealth of knowledge and ideas that were discussed, and to focus on one session in particular.

Today (Day 2) kicked off with a stimulating presentation: “Rethinking the Curriculum for Interesting Times” by Keri Facer, Professor of Education, Manchester Metropolitan University. Professor Facer is not directly involved in the Programmes, but was invited to discuss current issues and trends which may impact on the concerns focussed upon within the programmes. This session included a recent history and overview of children’s technology use and expectations, and how technology has become commonplace in all aspects of life. Prof Facer then went on to challenge traditional perceptions of using technology in education and discussed the informal and formal aspects and blurring of these boundaries.

One statement that perhaps resonated with many working in this area was the statement that there is often a missing notion of pedagogy in the introduction of technology in an educational setting– and gave an example of when those in a school were asked why they had bought several hundred mobile devices for students, the reply was “we just think it will be good.”!

Prof Facer pointed to the hugely complex education environment in which children are growing up, making the transition through various strategies and modes of delivery. Not many people are aware of aims of the country’s national curriculum or it’s key aims (which include nurturing responsible citizens, who are confident and effective learners). Also, with the role of parents and their input into education and supporting their children, she argued that we need to think about big picture; micro managing doesn’t work.

Prof Facer gave a whirlwind tour of the technological developments and some nuggets gleamed from her research about the pervasiveness of technology in the home and the differences in expectations and skills from the younger generation. She noted that there are now 2 almost wholly online schools in the UK, stating that ‘distance matters less, geography still counts’ and we need to be focussed much more on the individual rather than the institution.

I found of interest the statement that the “ability to think long term is correlated with socio economic status” – positing that the traditional model of careers guidance often doesn’t work and there is a need for effective mentoring that is lifelong and supports learners through various transitions.

Another stance that was novel was the idea of “Managing diversity as a resource rather than a problem” and I think the approaches to this will hopefully be refreshing and fascinating to see to say the least. Prof Facer argues that this is going to be critical; “Personalisation has huge drawback in that it allows you to exist in the world you already had, the encounter with new people can take you to new places” which may be tangential to statements about personalisation in the past. The new horizons should indeed be an exciting and engaging experience, and merely replicating the traditional models does not do justice to the potentials afforded by both the new technologies and any potential new pedagogies.

The presentation explored a number of approaches and ideas for the future of education, warning that We should think about what the ‘do nothing’ option would lead to. This includes the importance of critical thinking; perhaps school could be more about conformance and university more about higher thinking. We need to support thinking about issues and situations rather than content delivery. Non traditional learners may be a massive growth area; Prof Facer argued that there is a social justice in looking an non traditional university students rather than focussing on an elite few. She stated that education needs to rediscover the dialogue with which the community learning is focussed on, many lessons can be learned from such approaches.

One thought I had never heard articulated in such a context was that our model of adult-child relations is in question, that the current one has only been around since end of 18 century. In the last few years, this has been turned on its head. The traditional notion is that adults teach the younger generation and this focus has perhaps shifted and adults are not the knowledge source or mentor that they traditionally were, nor are children the ones with less knowledge – indeed, in terms of technology use and familiarity, they are often bounds ahead.

It was a session that I think certainly got people thinking (and as one person put it later ‘burst a few bubbles’) and was an excellent and inspiring start to the day, with participants ready to tackle some of the challenges Professor Facer posed. Indeed, it could be argued that no action is not an option.

“We are always focused on ‘how’ do we do stuff and we need to reclaim the right to ask ‘why?’”

Professor Facer’s presentation was video-ed so will no doubt be online shortly.