A few thoughts from the OER 12 conference held in Cambridge last week. Sadly I wasn’t able to stay for the whole conference but the first two days left me with plenty of food for thought. This year the event was held in conjunction with the annual OCWC conference and as a result one of the themes to emerge was the convergence, or not, of top down and bottom up approaches to open educational resources and practices.

In the opening keynote Richardus Eko Indrajit, of the ABFI Institute Perbanas, Jakarta, outlined Indonesia’s impressively coordinated top down approach to opening access to education and the adoption of open education practice. One of Indonesia’s more radical policies in this space is the use of google ranking to measure the academic impact of scholarly works and research outputs.

The second keynote of the event by Sir John Daniel, President of the Commonwealth of Learning, also focused on strategic top down initiatives and in particular UNESCOs current Fostering Governmental Support for OER Internationally project. Sir John reported that 17 European nations have already responded to UNESCO’s survey about national policies and intentions regarding OER. Given three years of HEFCE funding for open educational resources, and the undoubted success of the JISC / HEA OER Programmes, it was disappointing to see that the UK did not appear on the list of respondents. This prompted some discussion on the backchannel about who would be the appropriate agency to formally respond to this questionnaire on behalf of the UK. Joe Wilson of SQA suggested that ALT might be an appropriate body to lobby for a response and wasted no time in contacting them directly. I’ll be interested to see it they, or anyone else, manage to provoke a response.

In the interests of practising what we preach, kudos goes to David Kernohan of JISC and Simon Thompson of Leeds Metropolitan University for politely challenging Sir John for not having any license or attribution information on the images he used in his presentation.

It appears that the issue was raised again the following day and was challenged by Patrick McAndrew (@openpad) of the Open University.

One very pertinent comment that was widely re-tweeted was that “many people are doing OER but they don’t call it that”. This prompted some discussion about the benefits of supporting and mainstreaming open practice rather than highlighting open practice as being different and distinct. During a very engaging chat over coffee, Emily Puckett Rodgers of the Open Michigan initiative mentioned that she tends not to use the term “OER” with faculty as this suggests something new and different that they need to engage with, instead she prefers to use the more familiar term “learning materials”. Personally I’m inclined to agree with Emily, like all buzzwords, the term “OER” has accumulated an awful lot of baggage over the years which may be less than helpful going forwards.

Another back channel conversation worth noting was the disappointing failure of the Scottish Government and Funding Council to engage with the open education agenda and open educational resource initiatives at a strategic level. This lack of engagement was highlighted again this week when Martin Hawksey noted that the Scottish Government’s new Professional Standards for Lecturers in Scotland’s Colleges document fails to make any mention of open educational resources or practices.

While there are certainly a few grass roots open education initiatives across the country, such as Edinburgh University’s eLearning@Ed Conference, Scotland clearly has some way to go when it comes to embedding the concept of openness in education.

From the back channel to the undercurrent….David Kernohan tweeted:

@dkernohan: MOOCs and DIYU – very much an undercurrent of nervousness at #cam12

Sadly I missed the final plenary session where I believe some of these undercurrents started to surface. However Laura Czerniewicz of the University of Cape Town concluded her post-conference blog post Open Education: part of the broader open scholarship terrain.

“I do think that there is beginning to be some fluidity and cross over, (such as the focus on open practices and the interest in the open education landscape at JISC), and this is great. Let’s consciously do more of this.”

An admirable goal for us all to aim for.

@drnickpearce Slides from my talk about developing students and staff as scavengers (hyenas!) http://slidesha.re/HNEiEb #cam12#famousmonkeys 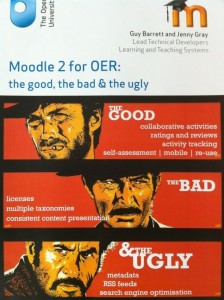 by Guy Barrett and Jenny Gray

One thought on “#cam12 Keynotes, backchannels and undercurrents”