She’s probably going to kill me for writing this but what the hell….Amber is leaving JISC at the end of the week and I can’t let her go without a send off! I’ve known Amber professionally for more years than it would be polite to mention and to be honest I can’t actually remember where she was working when I first met her, though I think it was pre-Becta. I do remember being really pleased when she joined JISC because she had a reputation for Knowing Her Stuff and for really understanding technology from a teaching and learning perspective.

I’ve collaborated with Amber on a number of JISC programmes and for the last three years we’ve worked together with CETIS colleagues Phil Barker, R. John Robertson and Martin Hawksey to provide advice and guidance on digital infrastructure to support the JISC HEA Open Educational Resource Programmes. It’s been an immensely rewarding experience. Although the UK OER Programmes are not “about” digital infrastructure development per se, they have fostered some really innovative technical developments such as the OER Visualisation Project, the CETIS OER Technical Mini Projects, the JLeRN Experiment and the OER Rapid Innovation Programme, all of which, to a greater or lesser degree, are a result of Amber’s vision and willingness to take risks.

Over the last three years Amber has also become an influential voice in the global open education debate. One of the things I have always admired about her contribution to discussions is that she has an enviable ability to ask the right questions, to synthesise complex and often conflicting issues, and represent a wide range of views without ever loosing sight of her own perspective. Some of the posts she has written for the JISC Digital Infrastructure Team blog have been important markers in the development of the UK OER Programmes.

Above and beyond her undoubted technical expertise, I don’t think it’s too far fetched to say that Amber has been a really positive role model for other women working in a domain where female colleagues are still rather under-represented. She is immensely patient and understanding, and I personally feel that I have benefitted enormously from her support and encouragement. She’s also really quite silly and is immensely good fun to work with.

The last project Amber, Phil, Martin and I worked on was a booksprint earlier this autumn. The aim of the booksprint was to synthesise the technical outputs of all three years of the UK OER Programmes and to write a book in three days. It was Amber’s idea of course and I have to confess that I really wasn’t convinced we were up to the task. I’m delighted to admit that I was proved wrong. With patient input from booksprint facilitator Adam Hyde we did manage to write our book, or most of it at least, and we actually had great fun while we were at it! 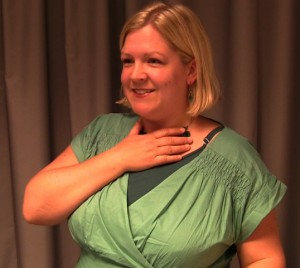 So now Amber is off to the University of Warwick where, among other people, she’ll be working with the lovely Jenny Delasalle who some of you might remember as Phil’s predecessor as CETIS Metadata SIG coordinator. I’m sure we’ll all miss working so closely with Amber but I have the feeling that we haven’t seen the back of her yet! So good luck with the new job Amber and I hope we can look forward to working together again at some stage in the not too distant future.

Now I had better go and finish writing the conclusion of our book, otherwise Amber really will kill me

* ETA Brian has very kindly let me know that the picture above was taken by Kirsty Pitkin, @eventamplifier, or possibly by Mr@eventamplifier! Who ever took it, it’s lovely