I’ve written an uncharacteristically long post on my personal blog about online identity and the way I’ve been mashing a whole bunch of things together over there for some time. Is it an e-portfolio? I suppose it must be!

Some time ago (like about 2 years or so) I had this great idea for an ePortfolio manager that would use timelines and playlists to organise ones life experience and be all superduperly web enabled and so forth. I even gave it a catch name and registered a domain for it: Mofolio

I posted up my mockups and then did absolutely nothing with it! Shame.

Anyway, this idea has been re-surfacing in my mind of late and if it’s not too late to pick it up again I’m going to see if I can make some kind of push into actually building it in the autumn.

The timeline component was something I always though really important to give people a visualisation of their work and experiences and today, while reading Alex Little’s blog I saw his post entitled Time for Timelines where he tries out two tools for doing just this; Simile which is a timeline-generating javascript widget from MIT and the intriguing Dipity which looks like it has beaten me to it in many respects. Dipity takes a bunch of feeds (rss, flickr, blogger, twitter etc etc etc) and turns them into a timeline. You can then add more stuff or remove things or make other timelines about the history of Spacerock in the 1970s or whatever floats your boat. Here’s mine – it took five minutes and for some reason wouldn’t accept my workblog feed. Ho hum: 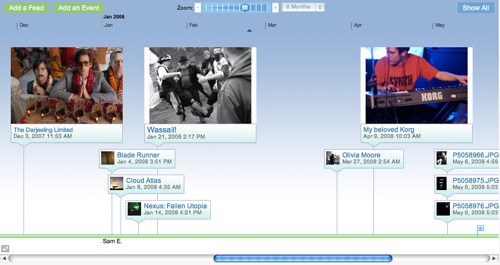 Anyway this all gives me pause for thought – Mofolio also needs to do much of this, but as I had conceived it, needs to do a whole load more too. Reflection, playlisting, organising of earlier educational experiences, organising of local resources (rather than just webstuff). Oh and it’s got to be prettier and have swimlanes rather than just everything muddled together.

Dipity and other such general timelining tools doubtless also have their classroom use potential. Great for teachers who want to have students build reflective timelines of their learning experiences or timelines representing the rise of the roman empire or whatever it may be. Then again there are always big bits of flip-chart paper and sticky notes.

Futuresonic is an annual conference and festival held in Manchester on technology, music, art and ideas. This year’s theme (spot the bandwagon) was entitled Social Networking Unplugged so I figured it would be a perfectly legitimate way to spend a Friday discussing social technology and it’s educational/creative/artistic implications with a slightly different crowd from the normal JISC/CETIS bunch. Oh and there were some excellent gigs too which I’ll write about elsewhere!

The big keynote of the day was Richard Stallman donning his free software halo and mantle and telling us all that we are complicit with the forces of darkness by using proprietary software. Frankly I find his point of view somewhat puritanical and preachy though there are some legitimate concerns over openness and security of the tools we use. Still his general political message and anti-megacorporation, pro-civil-liverties stance is very admirable. For me it’s a matter of practicality – for servers I’d not use anything but free software but it’s not going to make me ditch the Mac OS tomorrow for my desktop platform. I suppose I could but I just don’t want to. Shucks, I’m supporting EVIL. The corollary of free software in my mind is free hardware – and to the possibility of sweatshop-free open hardware which would be something to strive for. I notice that Scott has been on about this too. In other sessions though I didn’t think there were any major revelations there were a few cool things shown off – mainly along the lines of niche social networks and things to do with them. There were also some energetic open discussion groups set up in the afternoon – mine talking in a more artistic vein about the impact of social networking on artists and their relationship with their audiences (it was always a 2-way thing – but now it’s a 2-way thing on the internet).

Shannon Spanhake from calit2 at UC San Diego showed a device for measuring air pollution and reporting it back through web-enabled mobile phones to a central processing house and website – nothing to do with music (apart from the beeping she turned on to demonstrate the device) but certainly a novel application of technologies. Her plan is to do this on a large scale in Lima of all places – where the existing environmental monitors are so utterly useless (3 working monitors in a city of millions) that something needs to be done. Do you really want to be broadcasting information about how many carbon-monoxide particles there are in your trouser pockets though? I’m not sure I do.

An educationally interesting one was a sort of game called PMOG – or Passively Multiplayer Online Game. Delivered through a Firefox plugin, the concept being that whenever you are browsing the web you are simultaneously playing the game, fulfilling missions, discovering traps or messages that players have left lying around the web. An example might be that you hit the Tesco site and see a message pop up saying something like “mmm sausages” presumably as a starting point on some merry sausage related journey. I could imagine this being quite good fun in the classroom – providing a kind of framework around which you could get kids researching and exploring online but with a bit more guidance (from peers as well as mentors) than just “letting them loose on wikipedia”.

And I opened a Dopplr account just to tally up yet another network to belong to. This one is for frequent travellers and aims to bring about serendipitous meetings: “ooh look, Dave is in birmingham tonight and so am I, let’s go for a pint”. Happily it already interfaces neatly with other major social networks (including Facebook and Flickr) so in theory all my friends will pop up once they realise what a cool and indispensable thing Dopplr is. At the moment I have one trip planned to Newcastle-under-Lyme and two “friends” and neither of whom have chosen to tell me about their travel plans. There are a few very good points to Dopplr though – it uses OpenID for authentication (though you still have to register first) and it generally assumes that you want your information keeping private unless you specify otherwise, a very sensible assumption.

Then there was DirtParty – which is a bit like LolCats only with humans instead of cats. Nuff said.

The Unplugged bit probably was best articulated by the various art pieces. An exhibition called My Space Our Space Your Space produced an analogue analogy to various popular social networks. They provided participants with: Over the course of several days the people of Manchester filled the shop window with a wide array of strange things. From an operational point of view they experienced capacity problems (not enough shelving) server crashes (several boxes fell down) spam (someone put flyers for their gig in everyone’s envelopes) and all that you would expect from the “real” thing.