Another year, another CETIS conference. Monday and Tuesday this week saw around 140 delegates join us at the National College for Leadership of Schools and Childrens’ Services Conference Centre in Nottingham for the 2010 CETIS Conference “Never Waste a Good Crisis – Innovation & Technology in Institutions.”

Over the past few years, the backchannel conversations via twitter have provided a valuable addition to the conference surfacing opinions and alternative discussions, and also as a view into to conference for those not there in person. Despite some fears over the robustness of the venue internet connection, this year again saw a lot of online activity via twitter and blogs.

We utilised the twapper keeper service with the conference hash tag #cetis10 and the summarizr report it automatically generates is a useful snapshot of the conversations that took place. Our top (non CETIS) tweeter this year was David Kernohan – as he said himself nothing can stop him from tweeting. 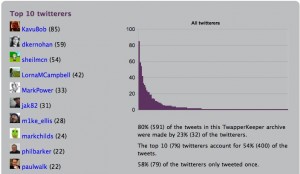 Our top “conversation” was had between Paul Walk and @mIke_ellis. From a personal point of view, seems I tweet quite a bit but don’t really generate that much response – which is a quite like how I feel in real life at times too 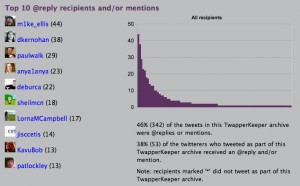 Other uses of twitter came from Lorna Campbell who blogged about a twitter exchange during the first keynote by Anya Kamanetz, and James Burke who used the storify service to create a view of the collate, aggregate and locate session. (BTW I really like storify but seem to be bottom of the their invite list, so a quick plea, if anyone has spare invitations, can I have one please?). Paul walk also used flickr to create a summary of the open innovation strand, using the “picture speaks a thousand words” metaphor.

We also set up a lanyard site for the conference this year. This was quite useful for pre-conference activity but to be honest I didn’t use it during the conference so probably need a bit more reflection on how it integrated with our existing conference site. I would of course be interested to hear other’s views on it – is this something we should use for other CETIS events?

As an experiment we’ve also used the paper.li service to create an online newspaper once again using the conference hashtag. We’ll only do this for a limited time (i.e a couple of days) but I’m wondering if this might be useful for our other events which have dedicated hashtags, to collate tweet, blog posts and a some other randomly related “stuff’.

So there you have it, a short summary of some of the online activity from this year’s conference. Thanks to everyone who took the time to engage with the conference. There will be more blogs (and tweets) over the coming days posted onto our website.

3 thoughts on “#cetis10 snapshot of backchannel and amplification”