Earlier this week Rachel Forsyth and Nicola Whitton from the SRC (Supporting Response Curricula) Project at MMU led a webinar titled “Models of Responsiveness”. The session focused on the ways the team have been working with staff across the institution around the complex internal and external issues and drivers around developing “responsive” curricula. The project has done a lot of work in developing a model for measuring responsiveness (see screen shot below) and more information on their work around this is available in the Design Studio. 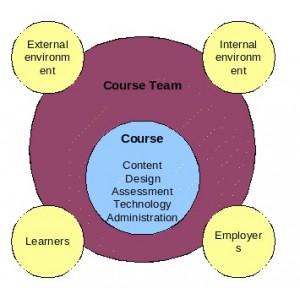 A Model of Course Responsiveness (SRC)

A core part of the SRC project has been around developing ways to engage staff in not only recognising the need for change but also in helping staff (technical, administrative and academic) make changes in an appropriate and timely manner. The team also recognised that certain aspects of the course approval process could be quite dry. So, to try and make a more engaging experience, as well as a series of traditional support materials, the team have developed a board game called Accreditation! which has been designed specifically to increase knowledge of course approval processes. 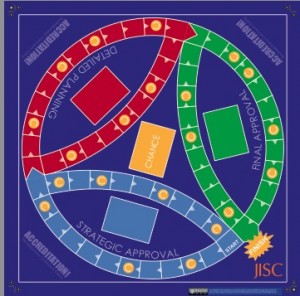 Working in pairs, players have to move through three zones, and are faced with a series of series of course approval related dilemmas. Five “quality” stars are needed in order for players to move from zone to zone. Although we only had time to look at a couple of the dilemmas during the session, it was clear that they have been based on very real experiences and are great discussion starters.

Of course games don’t appeal to everyone, and Nicola did point out that at a recent conference some players got a bit carried away with the gaming element and just wanted to win. However, I do think that this approach could have a lot of potential to engage and start discussions around the many aspects of curriculum design.

The game has been released under a CC licence and is available from the Design Studio, and if you did want to use it, you could also develop your own dilemmas too. The team are keen to get feedback from anyone who has used it too.

A recording of the very engaging presentation (c. 1 hour in duration) is available here.

2 thoughts on “Accreditation! A games based approach to supporting curriculum development”