Over the last two months, The Open University, the University of Bolton, KU Leuven, and IMC, with funding from JISC, have been working to develop a Widget Store aimed at the UK education sector using a codebase shared across and sustained by a range of other EU projects and consortia. (see Scott’s post for more details on the technical work and getting involved).

The Creating and Education App Store for the UK session at the CETIS conference, was the first opportunity for the team to share, firstly the vision of a shared codebase to underpin a range of existing and potential widget stores. And secondly, to share initial prototypes of UIs, and get feedback on the work to date and potential future development ideas from delegates.

Fridolin Wild (OU) gave a useful overview presentation “the university in a box” which highlighted the work of the OU in various widget related projects and initiatives which have built on the notion of the personalised learning environment.

Scott Wilson, (University of Bolton/CETIS) then set the wider context of widget developments, from W3C o the JISC DVLE programme, which is neatly encapsulated in the diagram below. 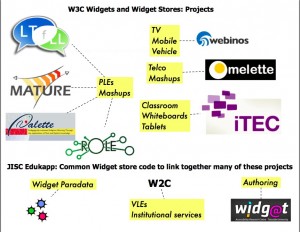 One of the key parts of the work is to provide extended community building features such as ratings, comments, use cases etc. As well as providing additional support for users of the store(s), Scott also outlined plans to share this “paradata” via the JLeRN Learning Registry node (which was discussed as part of a parallel conference session).

Over the 3 hour session there was much discussion around three key areas:

1. Institutional use of such a store: e.g. how would you use such a store? Have a local installation or use a hosted services? Implement connectors using IMS LTI for example.

2. Tracking and Recommendation services: what would be captured? how would it be shared? How could useful analytics be captured and used?

3. Widget Authoring: led by the Widgat team a useful discussion centred around their widget authoring tool.

For the conference plenary a two slide summary was produced, and look out for more details on the store over the coming months on this blog.