So we lit the UK SoLAR Flare in Milton Keynes yesterday, and I think it is going to burn brightly for some time. This post is just a quick round up of some links to discussions/blogs/tweets and pics produced over the day.

and Doug (master of the live blog) Clow of the OU.

Great overview of the day – thanks guys!

And our course we have some twitter analytics thanks to our very own Martin Hawksey’s TAGs archive for #FlareUK and the obligitory network diagram of the twitter stream (click the image to see larger, interactive version) 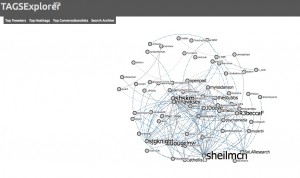 As a taster of the day – here’s a little video of what went on.