One of the problems with being part of an innovation centre like CETIS is that we suffer a bit from the Dory complex. For those of you unfamiliar with this concept, it is based on the character Dory in the movie Finding Nemo who is rather easily distracted by new things. Sometimes we find that “stuff” drops off our radar as we have moved on to the next shiny thing. So it is always great when we get a chance to be involved in development for a sustained period of time. An example of this for me is the WIDGaT widget authoring tool and its development team at the University of Teesside.

The WIDE project was part of the Jisc DVLE programme which I supported, and developed a number of fully accessible widgets. The team then got further funding and were able to develop their methodology and practice into an authoring tool for widgets.

Earlier this week I joined the team and about 25 others for a “WIDGaT in Practice” workshop. We had a chance to see some examples of widget from both the HE and FE sectors and were able to get hands on and create our own widgets. Having taken part in their design bash day about 18months ago to help the team scope the design for the authoring tool, it was great to see and have a play with a useable tool which pretty much covered all the design elements the “expert” group came up with.

There are a number of pre-built templates to chose from or you can start with a blank canvas. One of the common designs for widgets from practitioners has time/task management widgets to help students be more independent in their studies/life. We were shown a number of examples including a really nice simple visual reminder of key steps for each day for a student with autism and another with key stages for final year projects. The editor also includes a number of components such as embedding youtube videos and images, and social network components such as Facebook likes and comments. Examples of using these features included a widget which embedded a number of videos with a Facebook comment link so that students could share comments on content directly into their course Facebook group. There is also a simple quiz component which is proving also proving popular. 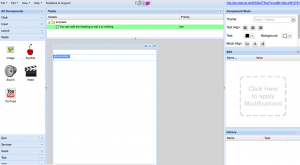 The interface is pretty straightforward but I did find manipulation things a bit tricky and the team are working at improving layout options. However as a quick and easy way to develop and share resources online it does have a lot going for it. It also has a lot of design support functionality built in to help users think about what they are creating and who they are creating it for. 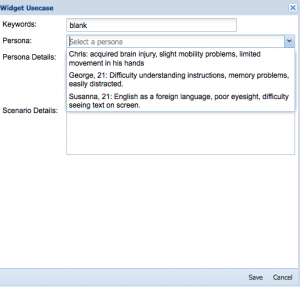 At #cetis13 next month the team are also running a workshop at the end of day 1 where they will be actively looking for new components to add to the tool as well as any other ideas for enhancements. As the tool is open source, it is a great example for the Open Innovation and Open Development session on day 2 .