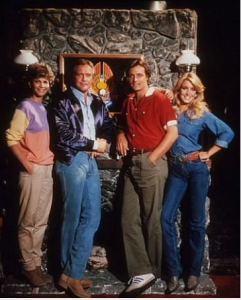 As Martin Weller pointed out earlier this week there are a growing number of MOOC metaphors being created. As I’ve been following the tweets from today’s “#moocapalooza ” (a hashtag I think invented by David Kernohan) a.k.a. Open and Online Learning making the most of MOOCs and other Models Conference I think I need to to add the Fall Guy to Martin’s list, particularly after reading this tweet.

Claims that University IT systems are not up to delivering moocs. Thoughts? #openandonline

I’m going to try and not too much in this post, and I apologise for taking this tweet at face value and out with its original context, but . . . Isn’t this just another one of those MOOC myths that twist the reality of what happens within institutions to suit the “education is broken we must build something else” mind set? As Martin Hawskey and Lorna Campbell both said in response to David’s tweet it’s not the systems that are the problem.

I’m going to stick my neck out (not too far) and say every technology you need to run a MOOC is available within every University. I’ve not seen anything in my adventures in MOOC-land that has made me think “oh wow, wish we could have one of those back in the non-MOOC world”. There are VLEs, blogs, wikis aplenty. And IT departments do a sterling job in keeping these running for all that “non MOOC stuff” that Universities do. You know, the dull and boring things you need to do “traditional” teaching.

Yesterday during a webinar on analytics and assessment and feedback, Rachel Forsyth (MMU) shared some of their learning system analytics data. Since the beginning of this year they’ve had over 8 million hits on their mobile interface which allows students to access key information like assessment marks, timetables and reading lists. At key points of in the year they have over 100,000 assignments being submitted electronically. I suspect many institutions are working at this scale. So I don’t think it’s a question of IT department’s not being up to delivering MOOCs, I think it’s more that they have quite a lot to do already and adding another potentially x000,000 of users is not something that can be undertaken lightly, or without any cost implications.

Investing in internal IT resources isn’t seen as a key part of MOOC development strategy. Why would it be when Coursera etc have been able to get money to build systems. In many ways using an external platform like FutureLearn is a very sensible option. It means that experiments with MOOCs can take place without putting additional strain on existing resources. We all know, or should do by now, that there’s no such thing as a free MOOC and that includes the infrastructure they sit within. So let’s not let another myth develop that the HE sector don’t have the technology or the ability to deliver MOOCs. They do, it’s just that it’s already working at capacity delivering their day to day business.

8 thoughts on “IT departments – the institutional fall guy for MOOCs?”