Typical.  You wait a week for an #OER15 blog post and then two come along at once!  Thanks to the folks at CADARN for this inspiring little video which really captures the spirit of the conference.  Featuring, among others, David Kernohan, Cable Green, Hayden Blackey, Josie Fraser and me. I think I may have got rather carried away with my enthusiasm for open education in the interview :}

It’s rather late in the day to be posting an OER15 blog post, but better late than never hopefully! :} As ever it was a hugely enjoyable and inspiring conference, and as is often the case, Marieke Guy of Open Knowledge beat me to it and wrote a great summary of the conference in her blog post OER15: Window Boxes, Battles and Bandwagons.  I’m not going to try and duplicate Marieke’s fab write up but I do want to pick out a few of the highlights of the conference.

The keynotes were excellent as always. Cable Green was in typically unequivocal form in his opening talk Taking OER Mainstream. He reminded us that in order to be considered as OER, content must be free and you must have legal rights to reuse, revise, remix, redistribute and retain it. And lest there be any ambiguity around Creative Commons licences, Cable stated that resources licensed with the No Derivatives clause are not OER.

Cable also touched briefly on open washing, which Audrey Watters has defined as

“having the appearance of open source and open licensing for marketing purposes while continuing proprietary practices.”

And he called Udacity out for openwasing with their Open Education Alliance, which despite the name, does not appear to be open in any sense of the word.

Cable went on to suggest that locking content behind paywalls, and restrictive licences creates “artificial scarcity in a world of abundance” and argued that it

“borders on immoral and unethical behaviour the way we spend public funds today on education. All publicly funded resources should be openly licensed by default.”

However OER is not just about saving money it’s about increasing the efficiency and effectiveness of public funding and ultimately, creating a more educated citizenry to work peaceably towards solving grand challenges.  Cable concluded by inviting comment and feedback on the draft OER Implementation Plan, which is aiming to identify the top strategic priorities for OER. You can comment directly on the document or comment on twitter using the hashtag #oerplan

I was delighted to be able to join a panel session with Cable immediately after his keynote alongside fellow Open Policy Network colleagues Nicole Allen of SPARC and Alek Tarkowski of Centrum Cyfrowe Poland, discussing open education and the broader policy environment. Picking up on the themes he’d introduced in his keynote, Cable highlighted the importance of providing support to move from policy to implementation, Alek highlighted the work of the Polish open e-textbooks program and Nicole discussed what we can learn from the success of Open Access advocacy.  I particularly liked Nicole’s point that while policy plays an important role in promoting open education, it is not hugely effective in engaging students in OER; the involvement of the library can be much more important here.

I presented a short case study on crowdsourcing policy from the ground up, based on our experiences of developing the Scottish Open Education Declaration. While this can be a good way to engage communities in policy development; acting on policies that are not supported by funding is challenging and pushing community policy up to government level can be difficult. However I was inspired by Alek’s comment that in Poland, they had been working on open education policy for many years before the government sat up and took notice, but when they finally did, all the groundwork had already been laid. 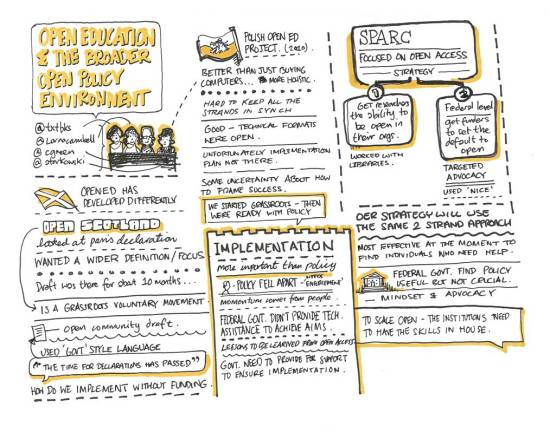 The immensely talented Kevin Mears drew this clever sketch note of our session, but I should clarify that I didn’t quite say “the time for declarations has passed”. That was a direct quote from Cable’s keynote and he was actually suggesting that we now need to move beyond declarations of intent to active implementation. This is something I absolutely agree with, declarations are a useful tool to help raise awareness of the value of open education but they are simply one step along the way and ultimately the role of policy has to be to inform and transform practice.

In terms of the Scottish Open Education Declaration, there would be huge value in evidencing the points of the declaration with examples of practice from across the sector, and judging by the number of colleagues who presented from Scottish institutions, there is certainly plenty of practice to choose from. I’m hoping to (eventually!) blog an overview of Scottish colleagues’ contribution to the conference over at Open Scotland, along with my slides from, Common Ground,  a short paper I presented on open education initiatives across all sectors of Scottish education.

This was the first time I’d heard Brian Lamb talk and he was every bit as engaging and thought provoking as you might expect.  Brian suggested that when it comes to embracing the open web scalability, sustainability and institutional wide impact are still an issue.  One solution to this problem is that we need to build “training wheels for the open web” to help colleagues who struggle.  Two initiatives that do just that are Domain of One’s Own, which provides web space to encourage colleagues at University Mary Washington to explore the creation and development of their own digital identities, and the fabulously named SPLOT! which aims to make it easy to post activity to the open web without creating accounts, or providing personal information.  One important point I learned from Brian’s presentation is that all cool developments happen over drinks :) Oh and he also highlighted the excellent development work of Pat Lockley which gets him extra points in my book.

The theme of this years conference was Mainstreaming Open Education, and while I think we all agree that we do want to see open education as an integral component of mainstream education I confess to being slightly uneasy that we run the risk of neglecting the experience of many colleagues for whom open education practice is increasingly being pushed to the margins as a result of budget cuts, redundancy, the casualisation of teaching contracts and the continued erosion of terms and conditions.

Josie Fraser touched on these themes in her brilliant keynote about Leicester City Council‘s policy to give permission to school staff to openly licence the educational resources created in the course of their work. Josie acknowledged that the mainstream can be a very normative and exclusionary place, synonymous with privilege, and tokenising rather than embracing however it can also recognise diversity and value difference.  Digital literacy is key to engaging people so they can critically challenge their online environments.  What really inspires me about Josie’s work with Leicester City Council, it that it provides an excellent example of how open education policy really can support transformative practice. If you haven’t already listened to Josie’s keynote, I can highly recommend it. It’s worth an hour of anyone’s time.  Unless you’re a dolphin lover.

At the end of each OER conference it’s traditional for the organisers to pass the baton to the new co-chairs and this year I’m delighted to say that the baton passed to Melissa Highton and I.  We’re honoured to announce that, for the first time ever, OER16 will take place in Scotland at the University of Edinburgh in April 2016 so watch this space!

owards the end of last week Phil Barker and I completed and published our technical synthesis of the ten  Learning Resource Metadata Initiative (LRMI) implementation projects funded through Creative Commons by the Bill and Melinda Gates and William and Flora Hewlett Foundations during phase two of the LRMI project.  As part of our work on LRMI for Creative Commons we have produced cases studies on each project and undertaken a synthesis of their experiences and outputs.

This was the starting point for discussions at the Open Scotland Summit at the National Museum of Scotland in Edinburgh, which brought together senior representatives from a wide range of Scottish education institutions, organisations and agencies to discuss open education policy for Scotland. Facilitated by Jisc Cetis, in collaboration with SQA, Jisc RSC Scotland and the ALT Scotland SIG, Open Scotland provided senior managers, policy makers and key thinkers with an opportunity to explore shared strategic priorities and scope collaborative activities to encourage the development of open education policies and practices to benefit the Scottish education sector as a whole.[...]