Today we wish a very fond farewell to R. John Robertson who is leaving us after six years working with JISC CETIS to emigrate to the US of A.

John joined the CETIS team at the University of Strathclyde in 2006 to take up the post of Repositories Research Team project officer. Coming from Strathclyde’s Centre for Digital Library Research, John made an invaluable contribution to RRT. In addition to participating in the Repositories and Preservation Programme synthesis, John was also the lead author, along with his UKOLN colleagues Julie Allinson and Mahendra Mahey, of the influential report An Ecological Approach To Repository And Service Interactions.

After the JISC Repositories Programmes ended, John took on the role of Technical Support Officer for the new JISC / HEA Open Educational Resources Programme in 2009 and it’s here that he really made his mark. John went on to support all three OER programmes and has personally interviewed every single project, (apart from one or two that disappeared into the ether), recorded their technical choices in the CETIS PROD database, and synthesised the outputs in an important series of blog posts. He also participated in the regular online Second Tuesday seminar series, attended all the programme meetings, contributed to scoping the technical requirements of the programmes and assisted in marking the numerous proposals received.

John has been tireless in promoting and disseminating the OER programmes and projects through a wide range of channels including JISC events, international conferences, academic papers, social media channels and of course his own blog, which quickly became required reading for anyone with an interest in open educational resources. In fact as Rowin’s recent post reviewing CETIS Year in Blogging showed, it was one of John’s OER posts that attracted more readers than any other.

Over and above his “official” role, John has been an enthusiastic and approachable member of the JISC community who was always available to answer questions or queries from projects and programme managers alike or to drop everything and dash off to a meeting at the other end of the country or even the other side of the Atlantic. 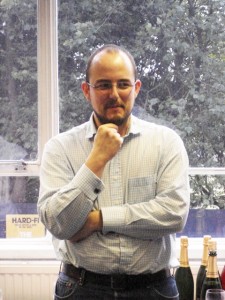 In addition to supporting the OER Programmes John has also maintained a watching brief on the Learning Registry project in the US. John has been instrumental in communicating the potential impact of this initiative and disseminating regular updates to JISC and the wider community.

Above and beyond all that, John has been a respected and popular member of both CETIS and CAPLE, where has has also made a significant contribution to the academic life of the department. Equally importantly, he also proved to be a gracious and enthusiastic host at our irregular office soirees!

I know we’ll all miss John enormously but we wish him all the very best for the future and will look froward to following his adventures via twitter. Whoever happens to be successful in recruiting John will be very, very lucky indeed. I am quite sure we haven’t seen the last of @Kavubob!