I was really encouraged to hear from our CETIS13 keynote speaker Patrick McAndrew that next week’s OER13 conference in Nottingham is shaping up to be the biggest yet. In our Open Practice and OER Sustainability session Patrick mentioned that the organising committee had expected numbers to be down from last year as the 2012 conference had been run in conjunction with OCWC and attracted a considerable number of international delegates and UKOER funding has come to an end. In actually fact numbers have risen significantly. I can’t remember the exact figure Patrick quoted but I’m sure he said that over 200 delegates were expected to attend this year. This is good news as it does rather suggest that the UKOER programmes have had some success in developing and embedding open educational practice. It’s also good new for us because CETIS are presenting three (count ‘em!) presentations at this year’s conference :}

This presentation will report and reflect on the innovative technical approaches adopted by UKOER projects to resource description, search engine optimisation and resource discovery. The HEFCE UKOER programmes ran for three years from 2009 – 2012 and funded a large number and variety of projects focused on releasing OERs and embedding open practice. The CETIS Innovation Support Centre was tasked by JISC with providing strategic advice, technical support and direction throughout the programme. One constant across the diverse UKOER projects was their desire to ensure the resources they released could be discovered by people who might benefit from them -i f no one can find an OER no one will use it. This presentation will focus on three specific approaches with potential to achieve this aim: search engine optimisation, embedding metadata in the form of schema.org microdata, and sharing “paradata” information about how resources are used.

This lightning talk will outline a novel approach taken by JISC and CETIS to synthesise and disseminate the technical outputs and findings of three years of HEFCE funded UK OER Programmes. Rather than employing a consultant to produce a final synthesis report, the authors decided to undertake the task themselves by participating in a three-day book sprint facilitated by Adam Hyde of booksprints.net. Over the course of the three days the authors wrote and edited a complete draft of a 21,000 word book titled “Technology for Open Educational Resources: Into the Wild – Reflections of three years of the UK OER programmes”. While the authors all had considerable experience of the technical issues and challenges surfaced by the UK OER programmes, and had blogged extensively about these topics, it was a challenge to write a large coherent volume of text in such a short period. By employing the book sprint methodology and the Booktype open source book authoring platform the editorial team were able to rise to this challenge. 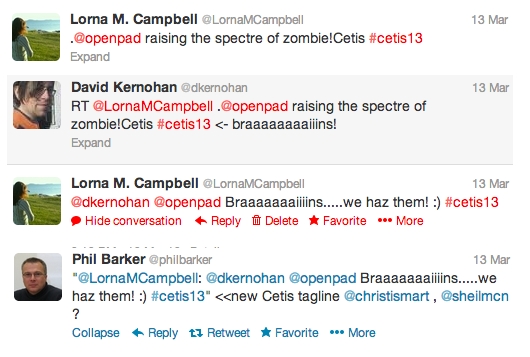 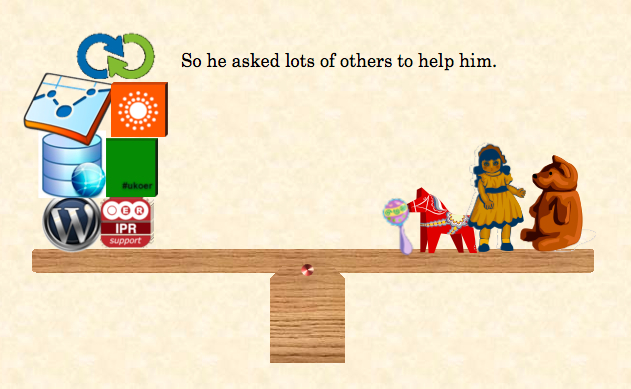 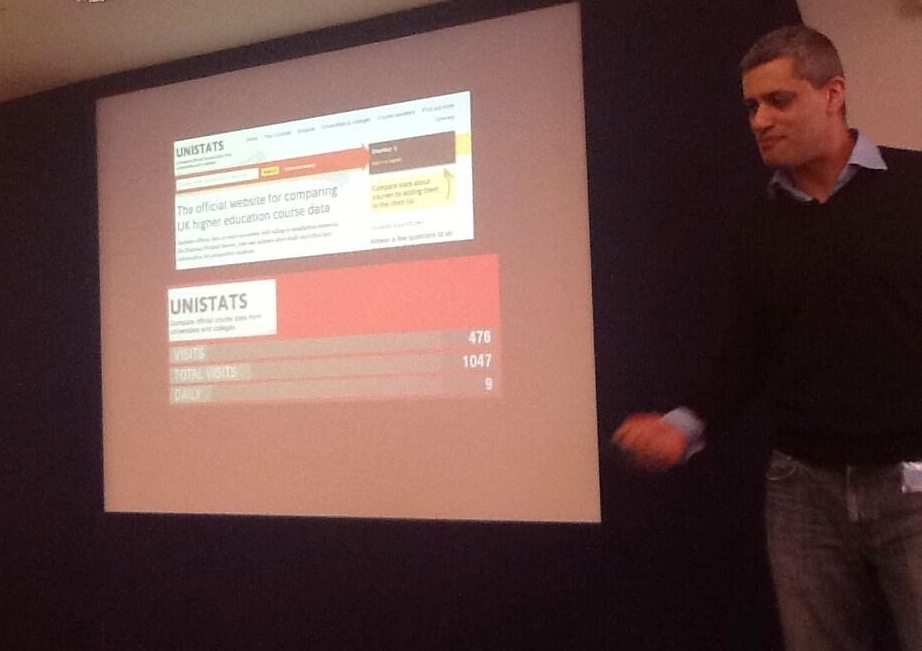 The Cetis13 Conference is just days away and excitement is mounting to fever pitch. Or something. Sadly, if you haven’t already booked your place at the conference, you’ve missed the boat. Don’t despair though! You can still follow the fun on twitter, #cetis13, and this year we will also be streaming our two keynotes, “Digital Citizenship and Open Social”
by Josie Fraser and “The Path to Open Learning is Paved with Good Intentions” by Professor Patrick McAndrew. You can find the livestream here http://jisc.cetis.org.uk/cetis13live

This year, for our sins, Phil and I are running the following session:

HEFCE funding of the HE Academy/JISC Open Educational Resources programme has come to an end, but this should not mean the end of UK OER. The emphasis of the programme was always on sustainable release of resources and change in culture and practice, not a one-off dumping of teaching materials. Through the programme we have seen changes in approaches to the management of learning resources, learned about how they can be disseminated openly, and embarked on new practices in Open Education that go well beyond (and occasionally do not even include) open access to learning materials.

In this session we will reflect on some of these changes and new approaches, with an emphasis on which are sustainable and how various technologies might help with sustainability. A good starting point for discussion would be “Technology for open educational resources – Into the wild” which reflects on several areas covered during the UK OER programme, though there are also many issues worth discussing that are not well covered in that book, for example management of the creation of OERs and practices in Open Education.

When Phil, Martin and I were initially planning this session we drew up a wish-list of people that we knew would be able to make a really thoughtful contribution to the debate. Based on the assumption that maybe only about half of our dream team would be able to participate, we e-mailed a dozen speakers and were <cliche>stunned and delighted</cliche> when almost everyone said yes! So we are now in the enviable position of having ten of the UK’s most challenging and thought provoking open education thinkers presenting in the space of just over three hours. Just look at our lineup….

We haven’t asked our presenters for titles in advance so I am looking forward to hearing everyone’s thoughts and perspectives on OER and sustainability. I think it’s fair to say that this line up should make for some lively discussions! Particularly as Suzanne has promised to deliver her presentation through the medium of interpretative dance, while David Kernohan will be favouring light operetta. At least that’s what they said on twitter, so it must be true, right? Oh, and Pat has threatened to do another video…. And all I have to do is chair the session and make sure no one talks for more than ten minutes. Easy? Wish me luck :}

Look forward to seeing you at #cetis13!