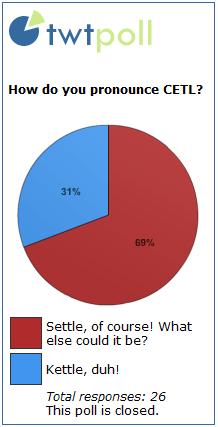 Something that’s always puzzled me is how often I hear the acronym CETL pronounced in what seems to me to be the ‘wrong’ way, so I ran a quick Twtpoll to find out what people thought the ‘right’ way should be.

I was surprised to see so many vote for ‘kettle’, although @Lawrie pointed out that that is how it was pronounced by the minister who launched the scheme which may well explain it.  There was also a vote for ‘rhymes with beetle’ from @dkernohan (there’s always one :p ), although he didn’t specify whether it should be ‘seetle’ or ‘keetle’.

Nicest story of all was also from @dkernohan

As a linguist, I’d argue that it should be ‘settle': ce- in English is almost invariably pronounced ‘se’, and the sound in the word it’s short for (‘centre’) is also pronounced with an ‘s’.  It’s very interesting to see how widespread the anomalous pronunciation of CETL as ‘kettle’ actually is.

Many thanks to everyone who voted!