[copy of my post from the RRT Team blog]

We’re pleased to announce the release of the final version of RRT’s introductory report:

An ecological approach to repository and service interactions .

In the report we examine the idea that ecology can usefully serve as a metaphor (or source of metaphors) to help articulate the complex contexts which digital libraries, repositories, and related services operate in.

The report is available from http://purl.oclc.org/NET/RepositoryEcology/IntroductoryReport .

With this milestone it seems appropriate to also mention other work related to this report.

[this is a copy of my post on the Repository Research Team blog http://jiscrrt.wordpress.com/]

In issue 57 of Ariadne, Phil, Mahendra, and myself have an article introducing some of our work on ecological models of repository and service interaction. “A Bug’s Life?: How Metaphors from Ecology Can Articulate the Messy Details of Repository Interactions”

In our introduction we outline the isseus that our work is addressing.
“The development, implementation, and support of real services challenges how we have traditionally articulated, represented, and tried to communicate the context of those services. We need abstract visions of an information environment, recommended standards, and models of software architectures (or component software functions) that can inform how we begin to develop local repositories and services. However, we, as a community of managers, librarians, researchers, and developers of technology, also need approaches that help us engage with the complex details of local contexts that shape how and why particular repository implementations succeed or fail”

The article goes on to outline different types of complex systems that exist, provides an overview of some relevant concepts from ecology and how they might be of use, and provides an example of using them to examine an academic’s dissemination of presentations (which was also the subject of our poster at DC2008).

Our article is available here http://www.ariadne.ac.uk/issue57/robertson-et-al . Comments and feedback are very welcome.

Our poster at DC2008 (http://dc2008.de/programme/posters) is a case study of ‘one’ academic’s dissemination of their presentations. It uses the repository ecology approach we’ve been developing and the resulting poster allows some interesting questions to be raised.  Here’s a copy for reference… 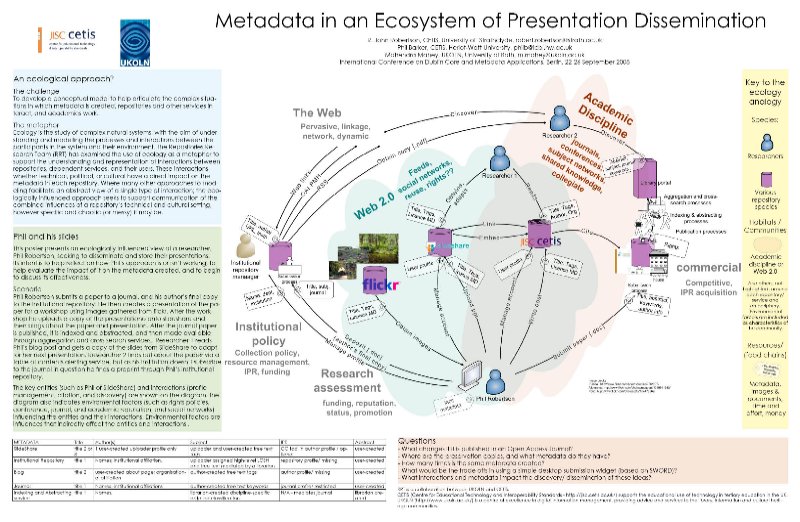 Here’s a pdf: Metadata in an Ecosystem of Presentation Dissemination at Dublin Core 2008

At the end of this week JISC’s Common Repositories Interfaces Group (CRIG) are holding a two day meeting to look at the key scenarios affecting repository interfaces.

Our discussions for the two days are going to build on a series of teleconferences organised by the CRIG support project – WoCRIG which have just been podcast. I’m both excited about this meeting and a little nervous.

I think that the support project are doing a good job of stirring us up to move forward the work of CRIG and helping us engage with and shape the next stages of repository interface interoperability. For the next stage of this work, this meeting, they’ve organised an unConference. Two days of informal thinking, discussing, and getting at the core of the interoperability issues related to repositories. I’m looking forward to it for what I know I’ll learn, for the chance to contribute, and for the chance to actually just have time to sit down and talk about these things.

The nervousness on my part comes from the unknown – I’ve never been to an unConference before and although the idea is good – to have discussions about what people want to talk about and to cut out the fairly predictable presentation part of a meeting and so to get at the eureka moments that usually happen alongside but not actually in conferences – I’m aware of how much, for me, those eureka moments come along because I’ve been sitting for extended periods of time for my mind to go off at tangents while half listening to a presentation which may or may not be relevant to my thoughts.

Anyway I guess it’s a bit like a codebash for ideas – and that’s no bad thing.

This a more focused brief discussion to follow up my last post about different approaches to modeling. It attempts to understand some of the similarities and differences between a domain modeling approach and an ecological approach.

A brief update on the progress of the repository ecology work. We’ll be revising the draft report shortly but here’s an overview of what else is going on with this work.

We held a workshop in conjunction with this year’s ECDL conference (workshop home page http://tinyurl.com/27jses ). I’ll return to some of the presentations and outcomes of the workshop in another post but, in summary, the workshop went really well. The participants understood the ideas being presented and I think that everyone (whether or not they agreed with the ideas presented) had a thought-provoking day. Thank you to all of the speakers and other participants.

There were some useful critiques of particular aspects of the approach, including: a concern that the distinctions between entities and species were unclear (particularly when mentally translated into other languages); an observation that the approach could complement (rather than conflict) with newer approaches to the development of architectures; and a call to provide some more structured guidance about how to represent ecological views or models.

The workshop affirmed that there is something in this approach and it’s emphasis on articulating messy particularity that isn’t currently being covered by other efforts. It reinforced our feeling that this is more of a communication, planning, and management approach than a more formal (mathematical/systems) modeling approach.

Next week, we’re going to be holding a workshop on the repository ecology work at the JISCCETIS conference. The session, being organized by Phil Barker and Lorna Campbell, will complement the ECDL workshop, and further shape the development of this work. http://wiki.cetis.org.uk/Learning_Resources_in_the_Ecology_of_Repositories

In December, I’ll be presenting at the Spanish Repository Working Group’s conference. They’ve chosen the theme of ecological approaches for their annual meeting this year. I’m not sure how much of the conference I’ll be able to follow at the time, but am looking forward to the opportunity. http://redsicura.iata.csic.es/xarxa/ocs/index.php?cf=6

Or: a Friday afternoon study of poker.

In an attempt to make some more sense of how the ecological view fits with some other key ideas in the repository space here are some different views on a game of poker. I hope that taking a non-repository related example should force a clearer articulation. When time permits I’ll provide a repository-based example as a precursor to including it in the revised ecology report. This is example is tentative and may not yet be balanced. It’s trying to capture the intent of each of these approaches and is a bit fuzzy in some of the details.

A brief overview of what I think the the relations between the below type of model might be: 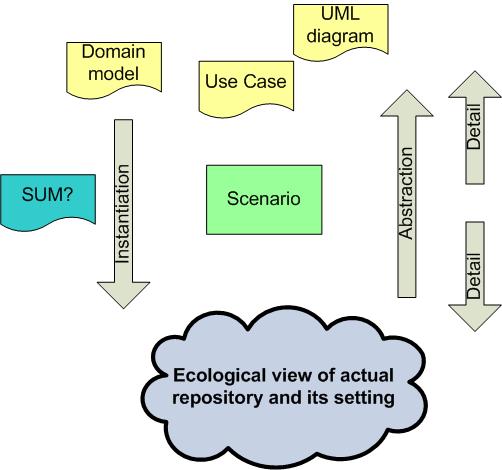 An ontology is used to describe an event in abstract ‘universal’ terms. This can be at varied levels of detail. Such an approach can support greater machine processing of the event and consequently richer software tools. ‘Weaker’ forms of ontology for human use, as found in classification schemes aim to identify commonalities and fit a particular event or concept into a bigger picture.

It might add information about the location of the game (location=Mike’s house), the probability of drawing particular cards or hands, the probability of a given player turning up (player participation=0.7). It might be attempting to capture the detail considered necessary to allow a simulation of the game or it might just be attempting to describe in detail an event using agreed terms.

A Use Case model

A Use Case presents a view of an interaction between an actor and a system. Describing how the actor uses the system to accomplish a goal. It is intended to be abstract/ not implementation specific. It is frequently used to support the design of systems or model business processes.

An example use case.

In the poker example, the use case would probably be focused on one player improving their game.

Player A observes the behaviour of Player B, C , and D. Player A tests when the other players bluff or fold. They note which players rarely bluff and who folds frequently. Player A changes their style as a result.

A Scenario is an instantiation of a use case or an aspect of it (conversely a use case is an abstraction of a scenario). Its purpose is to provide a common example to allow discussion of an issue among a varied group of stakeholders.

Player A wants to win more often at Poker. He observes that player D rarely bluffs. Player A changes his style so that they fold against D unless they have a three of a kind or higher.

“Domain models bridge the gap between the analysis of requirements (x-ref) and the production of design specifications. A domain model represents the common understanding of a key concept in the organisation.” (http://www.jiscinfonet.ac.uk/InfoKits/creating-an-mle/mle-design/domain-models)

Domain models present an agreed view a domain; this allows specified services to be presented in a way that allows them to be understood across that domain. Currently most domains are articulated at a national / subject level.

This is a trickier example ..

If we regard our game of poker as a service, it might exist as a concept in a domain model which provided a common understanding of Friday night social activities; or within a domain model of card games.

If on the other hand we took the game as the domain, we might begin to approach an ontology through agreeing names for the players, the games, its rules, and location (taking it at this level as a domain raises some granularity issues – but these are paralleled by the issues of trying to create a domain model of a repository).

Again not entirely sure about this example and the below is obviously not a SUM (being about 6 pages too short) but an attempt to capture what a SUM would address.

An example SUM might set out the rules of Texas Hold’Em, it might also articulate some of the dynamics of the interactions between the players as part of the the business processes the services (the game rules) support.

An ecological approach provides a selective view or presentation of particular habitat or movement of resources to explain, analyze, or manage that habitat or resource. It aims to

What makes this game of poker thrive? What would make it better? 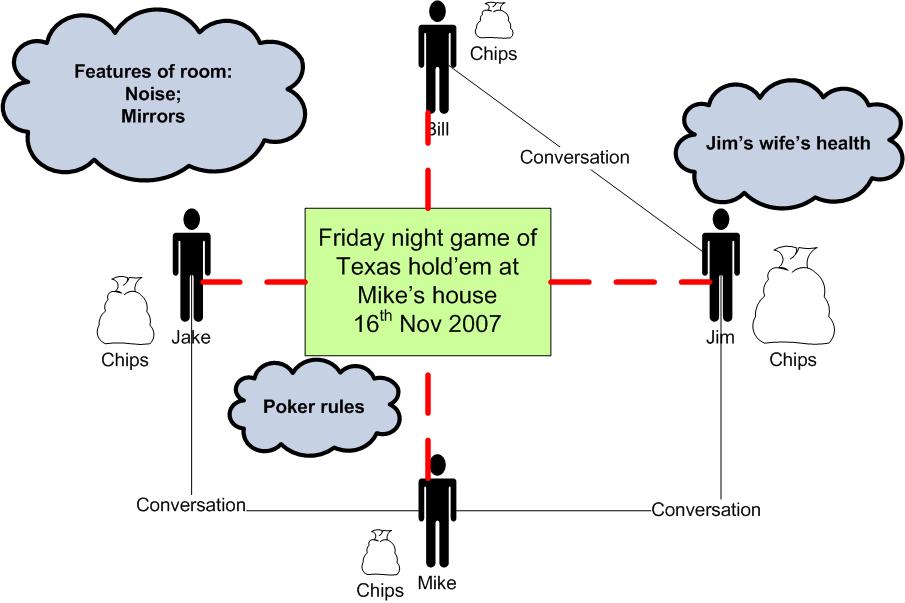 The introductory report is finally done (well the draft anyway).

I’ll post some more around the topic of an ecological approach to repository and service interaction but in the meantime.

the draft report is here: http://www.ukoln.ac.uk/repositories/digirep/index/Ecology