Stitching together the new ‘realtime’ collaborative platforms seems an obvious thing to be doing in theory, but throws up some interesting issues in practice.

Back when Wave was first demonstrated by Google, one of the robots (participants in a Wave that represent some machine or service) that got a few minutes in the limelight was Tweety the twitterbot. Tweety showed how updates to a Wave can be piped through to Twitter, and vice versa. Great, you can follow conversations in the one, without leaving the other. 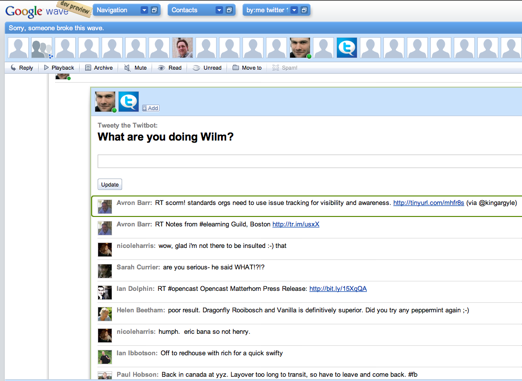 Tweety the twitterbot pipes tweets into a Wave

In the same vein, when Google unveiled Wave Gadgets (small applications that can be integrated into a Wave), their collaborative, multi-user, concurrent or realtime nature was so similar to Wookie, that Scott Wilson converted them to run on Wookie rather than Wave. Now that Wave is slowly opening up, what could be more natural than seeing whether a bunch of people on a Wave could be interacting with a bunch of people in Moodle via a Wookie widget?

Technically, all this is possible, and I’ve seen it work- but it does require some thinking about how the contexts fit together.

For example, Tweety relays all tweets from all followers of one account to everyone in a Wave. Worse, it relays everyone’s blips from that Wave as separate tweets via the one account. Apart from the fact that seeing other people’s contributions appear in your own name, the Wave conversation is just too noisy and fast to make any sense in a micro-blogging context. Likewise, all tweets from all followers of one person (live!) is a lot of noise when a worthwhile Wave conversation can only really be about a couple of linked tweets between a few followers.

The Wookie ‘Natter’ chat widget in Wave integration looked more of a natural fit. As integrations go, this was pretty shallow: Natter is displayed in Wave, but has no idea who is interacting with it there. Put differently, everyone in Wave is just one participant in Natter. This is potentially quite useful, as everyone else in Natter is in a wholly different environment, and therefore engaged in a different activity. They can’t see what’s going on in the linked Wave. Channelling contributions through one entity therefore makes sense; linked but separate. 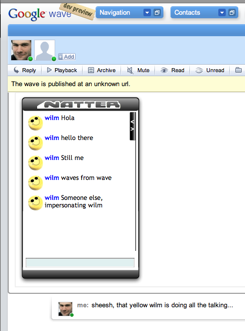 A deeper integration where Wave participants showed up in a Wookie widget properly, much like Moodle or Elgg based people do now, looks technically feasible and socially doable. Unlike Twitter and Wave, the basic user interaction models of Wookie and Wave look similar enough not to jar.

Other integrations are also conceivable: you could push updates on a Wookie widget as blips to a Wave via a robot (Tweety-style) and vice versa, but that looks like a lot of effort for not much gain over a widget approach.

Longer term, though, the best way to integrate realtime platforms seems to be via something like the Wave protocol. That way, people can pick and choose the environment and/or user interface that suits them, independent of the social context or network they’re interacting with. Fortunately, that’s what Google is aiming for with some more releases of open source client and server code and updates to the Wave protocol.

For a wider overview of Wave and its potential for teaching and learning, see my earlier post