This week we had one of our quite rare all of CETIS staff meetings. During the discussions over the two days, communication and how to be smarter, better at sharing what we do amongst ourselves was a recurring theme. If you keep up with the CETIS news feed you’ll probably realise that we cover quite large range of activities and that’s only the “stuff” we blog about. It doesn’t represent all of our working activities.

This morning I was reminded of another time-based aggregation service called memolane. Being a bit of a sucker for these kind of things I had signed up to it last year, but actually had forgotten all about it. However I did have another look today and set up JISC CETIS account with RSS feeds from our twitter account and our news and features; and I was pleasantly surprised. The screenshot below gives an indication of the timeline. 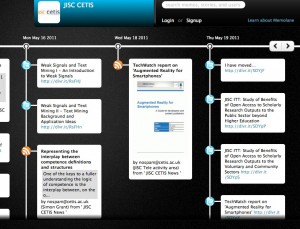 The team at memolane have released embedding functionality, but as we are super-spam-conscious here our wordpress installation doesn’t like to embed things. I have to also add that the memolane team were super quick at picking on a tweet about embedding and have been really helpful. Top marks for customer service.

As a quick and easy way to create and share aspects of a collective memory of organisational activities and output, I think this has real potential. I also think that this could also be useful for projects as a collective memory of their activities (you can of course and multiple feeds from youtube, slideshare etc too). I’d be interested in hearing your thoughts – is this something that actually might only make sense for us and our funders? Or do you think this type of thing would be useful in a more visible section of the CETIS website?